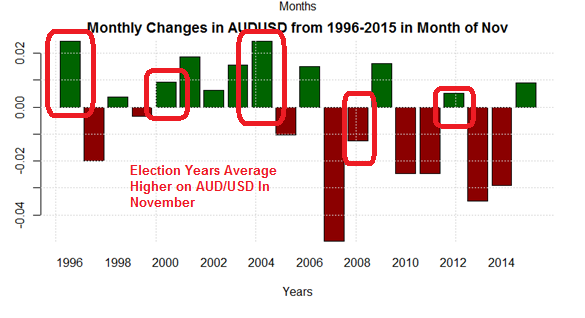 Point to Establish Long Exposure: Above Triangle Resistance at 0.7730

There has been a rising in the metals market that has directly benefited the Australian Dollar and could continue. The price of Copper recently touched seven-month highs on the pick-up in Chinese Economic data as well as markets looking past the election.

Australia recently had stronger than expected retail sales, but most of the focus in early November remains on the election. Traders looking past the election in the U.S. appear to be anticipating further upside in AUD & NZD vs. weaker currencies.

The seasonality argument can also be helpful this time of year. In short, the seasonal tendencies are for riskier assets to rally into year-end. The Australian Dollar provides a rather supportive reading in election years looking back to 1996. While a Fed hike is anticipated at the December FOMC meeting, it also looks to be fully priced in, which may provide more resistance than support on AUD/USD.

Technically, a few points stand out to me, least of which is that price, and momentum (green line) has remained above the Ichimoku Cloud since June. Additionally, an Andrews Pitchfork price channel (red) shows the median line acting as a backbone on the move higher. Should the cloud continue to hold as support, a move toward the target is increasingly likely.

An important note is that the Australian dollar and all other currencies in the G10 are likely to experience heightened volatility this week. As Christopher Vecchio recently pointed out IN, November Surprise? Markets Places Bets on US Election Outcome. This volatility can and likely will spill over to other currencies. In the current context, it appears any short-term weakness could be an opportunity to enter at a better risk: reward ratio especially if the VIX continues to fall. 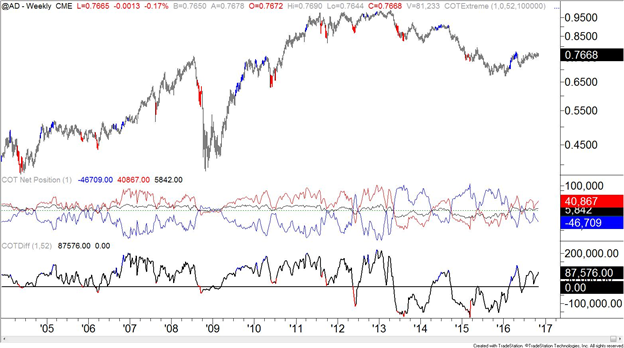 The bottom window on the chart above shows the building Bullish Bias of institutions at a time where the chart may be showing a long-term bottom. This window is called the CoT Index, which is the difference between net speculative positioning and net commercial positioning measured.

We could be on the verge of new multi-year highs in AUD futures that could continue to support a strong move higher in AUD/USD if achieved.

AUD/USD – Holding Above Ichimoku Cloud And 0.77 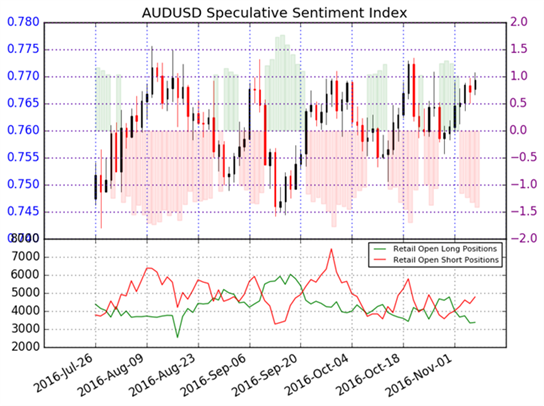 We use our SSI as a contrarian indicator to price action, and the fact that the majority of traders are short gives a signal that the AUDUSD may continue higher. The trading crowd has grown further net-short from yesterday but unchanged since last week. The combination of current sentiment and recent changes gives a further bullish trading bias.

I am looking to buy AUD against weaker currencies like JPY, CAD, and potentially USD if data this week continues to disappoint. I would like to buy closer to support as opposed to on an extending move higher. Upon this buyable pullback, a stop below the October 25 low of 0.75575 would be the first risk management level. The target is at 0.7830, which would take us to new 2016 highs. This target aligns with a favorable risk: reward ratio that our Traits of Successful Traders report found to be one of the best things a trader can do to ensure long-term sustainability in your trading.