Point to Establish Long Exposure: Breakout Through September High At 10,780

The German DAX looks to be setting up for a new break into 2016 highs, as Q4 gets underway. What makes this move intriguing is the arguments counter to the breakout in the form of Germany’s most formidable bank, Deutsche Bank (CFD: DB).

Either way, it’s amazing to see a key component in DB of the 30-member Deutsche Boerse Index sitting at the levels it is with the DAX looking as though we could be on the precipice of a breakout. Naturally, we’ll hold off on speculating about the next directional move of Deutsche Bank as revenue, profitability, and capital adequacy are key concerns among the negotiable Department of Justice fine.

The German Dax chart above shows consolidating price action above the resistance line that was drawn off the all-time high and lower high of late December 2016. Surprisingly, post-Brexit price action has been very encouraging for European Union Boerses. The FTSE250 (small & mid cap local market companies in the UK) has been on an impressive impulsively bullish incline from the ’08 lows. Another impressive sign, while very far away from all-time highs is the Euro Stoxx Banks Index (Ticker SX7E) that has broken above trendline resistance in a similar manner to the DAX chart above. At the same time, US indices are also setting up for what could be a rather explosive push higher as they are consolidation above prior resistance.

Given the move above resistance in the DAX, it looks appropriate to seek breakout targets to the upside. The main two targets to focus on is 10,980 level that brings a confluence of the Fibonacci Retracements 61.8% of the 2015/16 range. The second level of focus is the 52-week high at 11,430 from November 30, 2016, that aligns nicely with the 1.272% extension first moves higher off the February 11 low at 8,699.

The key level to watch for a breakout toward a sustainable breakout would be the September high of 10,780. A close above 10,780 would encourage DAX bulls to be on the watch of the key levels of 10,980 followed by 11,430. A break below the late-September low of 10,182 would be a critical sign it’s too early to be confidently looking toward the targets mentioned above.

We use our SSI as a contrarian indicator to price action, and the fact that the majority of traders are short gives a signal that the GER30 may continue higher. The trading crowd has grown further net-short from yesterday but moderated since last week. The combination of current sentiment and recent changes gives a further mixed trading bias. 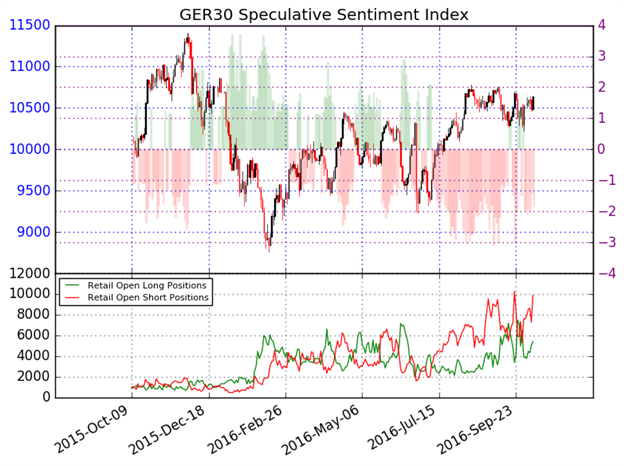