If Britain Is Out, Is the Gold Trade Back In?

Point to Establish Long Exposure: Spot at the Market

The “wisdom of crowds” has failed financial markets and those that bet that the United Kingdom would remain in the EU were shocked to see a Brexit”. As we see, a rise of separatist’s movements and “unprecedented customer demand for foreign currency transactions,” per Thomas Cook in the UK so it stands to reason that stores of value like Gold could do very well. Doing well for Gold would not be a new event in 2016. So far, Gold has risen ~28% YTD to the June 24, 2016, high.

In the aftermath of the EU-Referendum that led to the ‘Brexit’ outcome, we have seen US Yields plummet the most on record. The 2-year yield fell to 0.49%, which is the market's way of saying, at this moment we highly doubt the Federal Reserve will hike until 2018 at best.

It is not a long shot of the imagination that interest rates will not rise. It is also not a stretch to say that the initial catalyst for XAUUSD to burst higher at the beginning of the year with China Fears now has additional fodder with uncertainty surrounding both the UK & EU. Therefore, given the fundamental environment, and soon to be explained, the technical environment, XAUUSD may continue to outperform as the top asset in 2016 and beyond.

From an Elliott Wave perspective, we could have a breakout on our hands that is heading toward the August 2013 high of $1,433 and beyond. Elliott Wave analysis is complicated, albeit invaluable in my view, but the crux of Elliott Wave is finding and trading the third wave of a five-wave sequence. The third wave is typically the steepest and most aggressive wave, and it appears we’re close to the environment that would favor such a development.

Another Technical Indicator that I have become fond for over the years is Ichimoku cloud. The Cloud acts as support in an uptrend and resistance in a downtrend. If nothing else, as long as the price of Gold remains above the Ichimoku cloud, currently at ~1265 that sits very close to today’s low of 1,250 which is the invalidation of the pattern.

While an entry at the market may seem extreme, if this is a wave 3, then a breakout could be soon upon us. The trade’s target aligns with a favorable risk: reward ratio that our Traits of Successful Traders report found to be one of the best things a trader can do to ensure long-term sustainability in your trading. 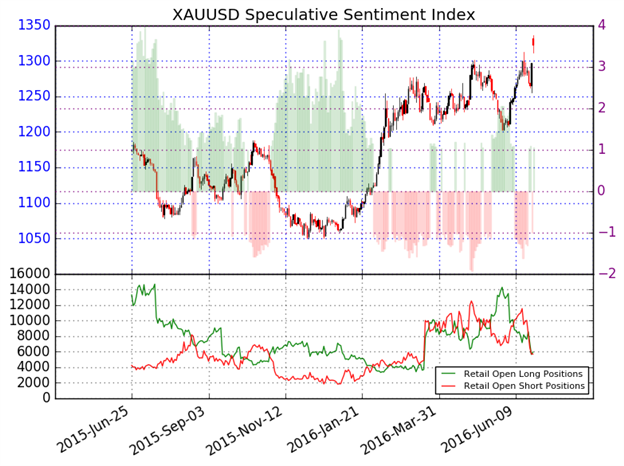