This Wednesday marks the first of a series of major event risks for the summer that could alter the course of major FX trends for months to come. This Wednesday will provide the Federal Reserve Rate Announcement where at one time, the market had been pricing in a 34% probability of an interest rate hike at the June 15 meeting as recently as May 24, and a priced in July hike.

However, one comment from the Fed’s head lady has remained on the minds of FX Traders with US Dollar exposure:

“Policy is not on a pre-set course.” - Janet Yellen, Chairwoman of the Federal Reserve

Since the end of May, with markets optimistically looking to the Federal Reserve to take action by raising interest rates, the news releases in the US have taken a nosedive. The most notable event was Non-Farm Payrolls with a massive jump in workers forced to take part-time jobs because reasonable or available full-time jobs simply were not there. After a few more reports that missed economists’ expectations in the first half of June, the words above start to sound louder and louder.

As of Monday, June 13, 2016, there is a 0% probability of a rate hike by the Federal Reserve at the June meeting this Wednesday and only a 15.7% probability of a move in July. However, it’s worth noting that depending on the European Referendum outcome on June 23, we could easily see that probability and that of the next few meetings wiped out and replaced with zero if we get a risk-off event.

There is much to despise about the Fundamentals of the Eurozone too, but the question over the last 16 months has become, “but how much is priced in?” Many traders easily are caught up in recency bias, which is trading yesterday’s already priced in the news and hoping to get a new reaction to their benefit. Given Draghi’s most recent announcement in March, which was an expansion of QE, we’ve only traded higher. If nothing else, we may be moving sideways if not higher, much higher relatively speaking.

The Chart above (H4 EUR/USD), shows an uptrend in EUR/USD albeit, a choppy one. Here you can see the benefit of buying dips and the peril of buying rips or breakouts. Some traders may prefer to be long here as opposed to a breakout > 1.1415. However, what’s unique about 1.1415 is that since January 2015, we’ve been unable to spend more than a week above this level. Therefore, if we can break higher and sustain that break, it would appear from a technical view to be the clearest precedent for a strong move to and through the August high (1.1712).

Currently, this would set up a leading wedge type formation that would favor an aggressive move higher if the anticipated set-up of a break above 1.1415 came to fruition. A 161.8% Fibonacci Expansion of the March-August-December Extremes would target 1.25408. While this seems extreme now, it’s worth considering the US Dollar is still hovering around a 3.5% of its recent peak. A more significant breakdown could bring about such an appreciation on EUR/USD that is presented in this analyst pick. Given this environment, a trailing stop would be used above an opposing down-fractal on the daily chart so that the trade would align with a favorable risk: reward ratio that our Traits of Successful Traders report found to be one of the best things a trader can do to ensure long-term sustainability in your trading.

While the above view favors my anticipation of price action continuing higher, there is another well-regarded view worth sharing. The main alternative view is that of a larger triangle that is a little more than half-way complete and that began off the 1.0460 low in March 2015.

Under this view, we’re working on consolidating between the December low of 1.05157 and May high of 1.1615. When looking at a triangle view, this is not US Dollar Bullish per se, as much as it is not EUR Bullish. The chart below gives an overview of the perceived triangle, which is one of two alternate Elliott Wave counts I’m utilizing right now, with my primary view maintaining a breakout to new multi-year highs:

Right now, our Trader Sentiment Indicator SSI continues to provide a bullish bias. The ratio of long to short positions in the EURUSD stands at -1.20, as 45% of traders are long. Short positions are 6.5% lower than yesterday and 11.1% below levels seen last week. Open interest is 3.9% lower than yesterday and 7.1% below its monthly average. We use our SSI as a contrarian indicator to price action, and the fact that the majority of traders are short gives a signal that the EURUSD may continue higher. The trading crowd has grown less net-short from yesterday and last week. The combination of current sentiment and recent changes gives a further mixed trading bias. 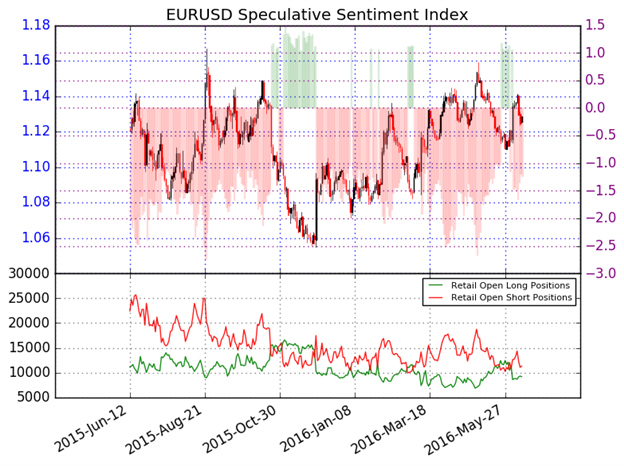