Point to Establish Short Exposure: At Market With Stop At 1.4662

Here’s why a Cable short is looking more attractive than usual to me. This Monday put us one month away from the June 23 European Union referendum for the United Kingdom also known as the ‘Brexit’ vote. You can read much of what you need to know about the ‘Brexit’ vote on June 23 here.

This event is significant because we are entering into a likely period of peak volatility in anticipation of even a ‘Vote Stay’ being priced into the options market via one-month implied volatility. Naturally, if we get a ‘Vote Leave’ outcome, there is very few people who know exactly how a ‘Brexit’ could play out given the potential implications.

In addition to the event risk surrounding the EU referendum on June 23, we recently had a Hawkish Surprise from the Federal Reserve, which continues to forecast rate hikes in 2016/7. Over the weekend, Federal Reserve Bank of San Francisco, John Williams said that 203 2016 rate hikes and 3-4 in 2017 felt about right.

From a mean-reversion point of view, this trade pick comes at the same time that evidence is surfacing that the US dollar plunged too far too fast. Additionally, GBP may have overshot strength given the risk that investors don’t want to take regarding being exposed to the negative effects of the UK potentially leaving the world’s largest trading block in the EU.

Right now, our Trader Sentiment Indicator SSI continues to provide a bearish bias. The reading on SSI for cable sits provides the lone US Dollar bull case at 1.15 as 53% of traders are long. We use our SSI as a contrarian indicator to price action, and the fact that the majority of traders are long gives a signal that the GBPUSD may continue lower. 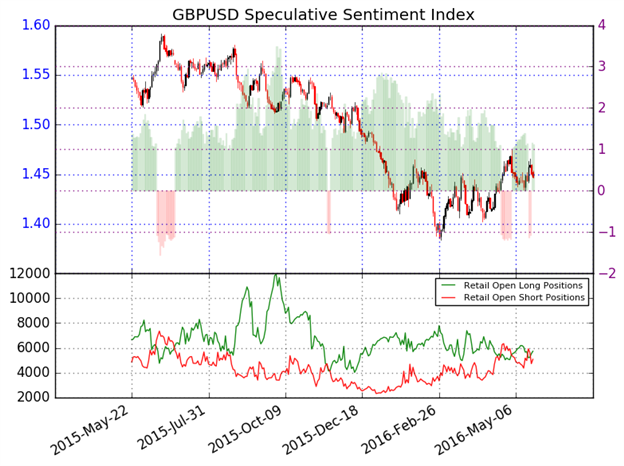 I am looking to sell GBP/USD at the market with a stop above the May high at 1.4662. Price action should be volatile as many polls are coming out in anticipation of the June 23 ‘Brexit’ referendum at a virtual tie so smaller positions should be used because a swing for one outcome or the other in the polls could exponentially increase price variance.

Sentiment shows the move could have legs to the downside as retail leveraged traders are now chasing GBP/USD higher against a strong down trend. Should the trade begin to move in my favor by breaking below the May 16 low, the eventual target will be toward 1.4004, the April 6 Low. A trailing stop would be used above an opposing up-fractal on the daily chart so that the trade aligns with a favorable risk: reward ratio that our Traits of Successful Traders report found to be one of the best things a trader can do to ensure long-term sustainability in your trading. The eventual target, which is rather extreme, at 1.35006, is at the January 2009 low.