The EUR has been one of the most stubborn currencies in 2016. By ‘stubborn’, I mean that many traders have looked for it to push lower and lower, and yet, it seems to have done the opposite since December 3, 2015.

The chart above shows a long-term channel from the beginning of 2009 that EUR/GBP has done a fine job of containing price. The recent throw-under in 2015, brought a strong reversal higher that soon tested the top side of the channel. However, given the event risk surrounding this trade, a push higher within the blue channel may soon develop.

Similarly, GBP has been in a precarious position where January-March saw an aggressive pricing in (read: GBP Downside) that has recently stalled. However, the recent polls have shown that there doesn’t appear to be a clear-cut path toward the ‘Remain’ outcome. While many Intelligence Groups keep the favor toward UK Remaining in the EU, other polls are showing that the outcome isn’t so clear.

While there is appropriate fear of EUR going down with Sterling should a ‘Brexit’ develop, there could be more downside for GBP in the near-term with additional upside for EUR in the near term as well. Recently, GBP moved to the strongest G10 Currency in an internal index for 28 currency pairs pitted against a 200-MVA on a 4-hr chart. That is why this trade is looking for a breakout to trigger a Stop Buy order. Entering short sterling at the market isn’t a preferred trading methodology and goes against some of the wisdom found in our Traits of Successful Traders Research Report.

The irony of this analyst pick is that I think the EU Referendum has the potential to be wildly GBP Bullish if a ‘Remain’ vote wins out. However, for now, the chart of EURGBP looks like it has some unfinished business to the upside and the EU Referendum is still a month away at a time the ECB has been awfully quiet about the strong EUR. These events alone may be enough to trigger the Stop Buy order and bring us toward the trade target of 0.8350.

In any event, current futures positioning per the CFTC’s Commitment of Traders report shows Speculators (red line in middle graph) continue to favor GBP downside, which could grow if the 20% undecided group begins to favor a Brexit. GBP Positioning Shown Below As of May 17, 2016. 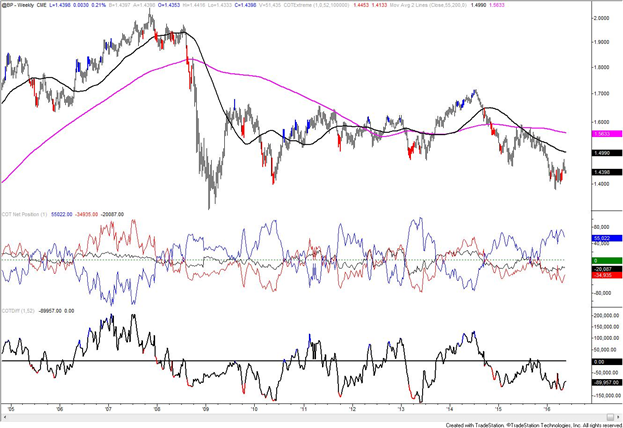 Right now, our Trader Sentiment Indicator SSI is providing a further bullish bias. The reading on SSI for EUR/GBP sits at the bearish trigger reading at -2.3245, which favors the view that the British Pound likely has room to trade lower against EUR with roughly 65% of retail sentiment net short. The trading crowd has grown further net-short from yesterday and last week. The combination of current sentiment and recent changes gives a further bullish trading bias.