Point to Establish Short Exposure: Breakdown Below May 10 Closing Low of 0.6750

The New Zealand Dollar ended last week lower by ~2% against the US Dollar, and further losses could be in store as economic data around the world continues to sour. Local data has been solid with employment and recent GDT auction showing whole milk power is bidding up higher prices than expected. However, concerns are still focused abroad. Unstable data in China threatens the commodity recovery, which New Zealand has benefitted. The upside in NZ Data has been wealthy migrants testing the labor supply as well as the supply of credit and real estate in New Zealand.

While these forces seem positive on the surface, the susceptibility of another commodity downturn alongside weakening Chinese Data sits front and center on traders minds. We can see this as relative strength has shifted to the commodity FX front since the RBA cut rates earlier this week, and the market is pricing in another RBA cut later this year.

Should the scenarios come onto the scene, we would likely see new lows in the AUDUSD. If we do not, we likely will not, and that is why this in an entry order based trade and not an “at market” trade.

Technically, a few points stand out to me, least of which is potential double-top pattern against long-term channel resistance. The channel is one reason why I think selling a breakdown makes more sense than selling a pull back. Additionally, the price has also come into the 38.2% Fibonacci retracement at 0.6846 level and stalled, which may show we’re running out of steam on the upside. If the recent move lower from 0.7055 was a sign of things to come, the trend lower could resume and resume aggressively. 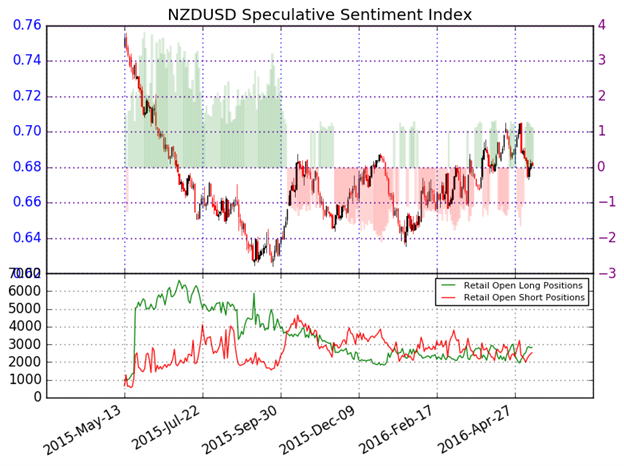 I am looking to sell NZD/USD if we break below the May 10 close of 0.6750. I would like to sell on a break of support as opposed to a retracement because the sentiment doesn’t provide its usual cues and if the USDOLLAR doesn’t strengthen (needed for trade to work) the price could move back up to the top for the longer-term range in the 0.6950/7050 zone.

Should we get a sellable break, a stop would be placed above the recent high that currently sits at 0.6849 or about 100 pips above entry. The full target is at 0.656350, which is a 200% expansion of the Double-Top Pattern From April & May. This target aligns with a favorable risk: reward ratio that our Traits of Successful Traders report found to be one of the best things a trader can do to ensure long-term sustainability in your trading.