Q1 Earnings announcement are coming upon us. Of course, much attention has been placed on the surprisingly Dovish Yellen at the Economic Club of New York on Tuesday, and now eyes are on NFP. However, a common theme over the last few years has been the strengthening JPY as stocks retreated. While it is difficult to say whether or not optimism will be carried through earnings, if we see another drop in the SPX500, we could also see another drop in USD/JPY. Here is why this may unfold.

As a potential guide to what may happen in U.S. Earnings, Chinese Bank Earnings have hit some of their most disappointing results in a decade possibly ushering in what one called the ‘New Normal’ in China. April will see a buildup of increasing number of S&P500 will enter their blackout period, hitting their peak in the third week of April. While the downside is not guaranteed, equities become unusually vulnerable to negative shocks, whether on earnings themselves or something else altogether, to remain stable if selling pressure builds. If a similar outcome happens in the United States as we have recently seen with Chinese Bank profits, not only will you fail to have corporations buying stock to prop up the market, but you could also have investors pulling out faster than usual due to fear.

Recent bank research noted that corporate buybacks have hit their highest level in six months exceeding the levels seen this time last year. A recent popular article titled, there is Only One Buyer Keeping S&P 500's Bull Market Alive explains the Buyback phenomenon in detail. Either way, with the natural buyer out of the picture, we may see a reason for JPY to strengthen while taking down the weakest currency, the US Dollar, even further.

The critical resistance of 115.55 has yet to break. Therefore, the bearish bias remains. The long-term head & shoulders target of ~106 has yet to be hit, even though the smaller target of 110 was taken out in early March.

The chart below shows an overlay of the SPX500 on the USD/JPY. It is easy to see that the divergence between the SPX500 & USD/JPY has reached recent extremes. Combining the fundamentals of Chinese Bank earnings, Discretionary Corporate Buy-Back Blackout, and the potential of JPY strengthening, we could see a move down to the long-term target of 106. 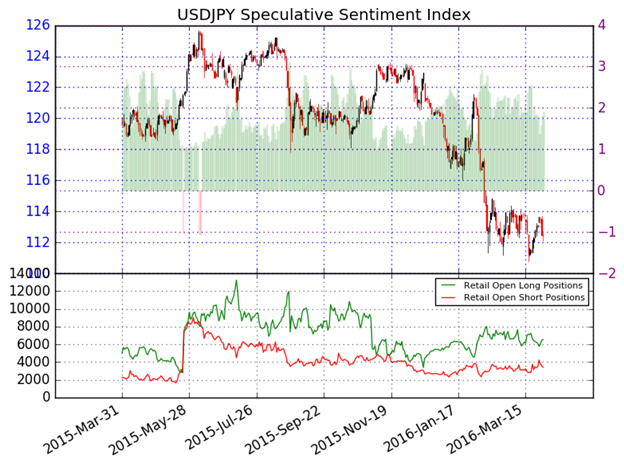 USDJPY - The ratio of long to short positions in the USDJPY stands at 1.91 as 66% of traders are long. Yesterday the ratio was 1.78; 64% of open positions were long. Long positions are 1.2% higher than yesterday and 0.9% below levels seen last week. Short positions are 5.6% lower than yesterday and 4.0% above levels seen last week. Open interest is 1.2% lower than yesterday and 0.9% above its monthly average. We use our SSI as a contrarian indicator to price action, and the fact that the majority of traders are long gives signal that the USDJPY may continue lower. The trading crowd has grown further net-long from yesterday but moderated since last week. The combination of current sentiment and recent changes gives a further mixed trading bias.