Point to Establish Short Exposure: At Market With Stop At 1.4515

Here is why a Cable short is looking more attractive than usual to me. This Wednesday will put us three months away from the June 23 European Union referendum the United Kingdom also known as the ‘Brexit’ vote. You can read much of what you need to know about the ‘Brexit’ vote on June 23 here. This is significant because we will soon begin to get a taste of volatility being priced into the options market via three-month implied volatility. Currently, we are getting close to levels not seen since the height of the 2009 Financial Crisis as we have surpassed the 2014 Scottish referendum implied volatility levels.

This comes at the same time that evidence is surfacing that the US dollar has plunged too far too fast. A one-year three standard deviation channel on the FXCM Dow Jones dollar index shows a piercing of the lower bound in the post-Federal Reserve price action last week.

The wildcard in this trade currently is the US dollar, which is fallen consistently over the last month, and was not even held up by the 200-day moving average. An increase in expected volatility would likely bring down sterling while a trend-resuming rise in the US dollar would make this pair one of the most exciting to watch over the next few months.

By there is much uncertainty surrounding the US dollar, Atlanta Federal Reserve President Dennis Lockhart provided a few bullish notes in his speech on Monday including:

*LOCKHART: FED GETTING `CLOSER AND CLOSER' TO FULL EMPLOYMENT

To be fair, the burden of proof now lies directly on the back of US dollar bulls. However, relative bets like GBP/USD heading into the ‘Brexit’ vote can make certain dollar longs specifically attractive.

Right now, our Trader Sentiment Indicator SSI continues to provide a bearish bias. The reading on SSI for cable sits provides the lone US Dollar bull case at 1.21, which favors the view that the British Pound likely has room to trade lower with 55% of traders currently long. We use our SSI as a contrarian indicator to price action, and the fact that the majority of traders are long provides a signal that the GBPUSD may continue lower. The trading crowd has grown further net-long from last week. The combination of current sentiment and recent changes gives a further bearish trading bias and could favor the short re-entry on a retracement. 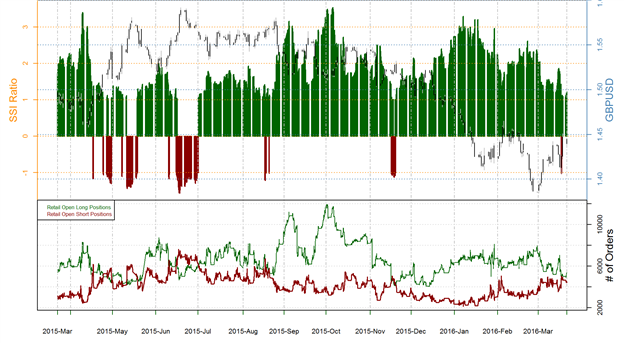 I am looking to sell GBPUSD at the market with a stop above the post-Federal Reserve high at 1.4515. Price action should be volatile as many polls are coming out in anticipation of the June 23 ‘Brexit’ referendum at a virtual tie so smaller positions should be used. Sentiment shows the move could have legs to the downside as retail leveraged traders are now chasing GBP/USD higher against a strong down trend. Should the trade begin to move in my favor by breaking below the March 16/17 low, the eventual target would be toward the January 2009 low at 1.3500. A trailing stop would be used above an opposing up-fractal on the daily chart so that the trade aligns with a favorable risk: reward ratio that our Traits of Successful Traders report found to be one of the best things a trader can do to ensure long-term sustainability in your trading.