While fundamental troubles have been mounting up around the world, enough to reverse nearly all of the expected hikes from the Federal Reserve, few countries are facing the predicament that faces Britain. In a word, Brexit looms, and the threat to the UK economy and British Pound are likely to severe to scare off all but the bravest longs. There are expectations that a divorce from the U.K. and the Eurozone would cost 10%+ of the UK GDP with many major employers and GDP contributors like Financial companies threatening to leave should a vote approve of Britain leaving the Eurozone. Aside from the ominous pending Brexit vote, inflation expectations continues to disappoint as today’s print failed to bring renewed hope that the Bank of England was still unlikely to hike anytime soon.

A combination of a US Dollar relief rally and the previously mentioned news caused GBPUSD to hit a two-week low this morning at 1.4335, which was below the 21-day moving average. The 21-DMA has acted as a form of soft support for the month of February, and the resumption lower has favored a resumption of the downtrend. The next support level below today’s low rests at the 61.8% retracement level of the rise from the January 21 low. A break below there would favor a retest of 1.4078 with a move toward 1.39-1.35 zone well within the imagination. Such technical pressure has kept Sterling firmly at the bottom of a strong/ weak analysis of a 4-hour chart put against a 200-period moving average. 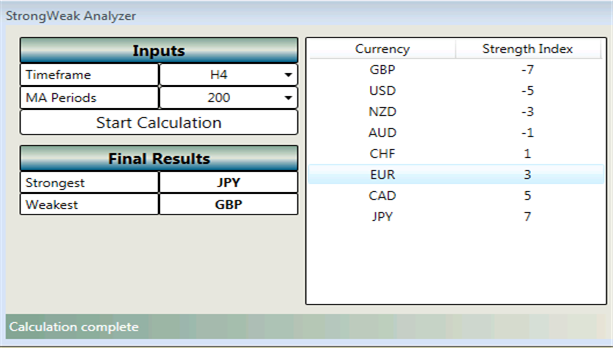 Right now, our Trader Sentiment Indicator SSI is providing a bearish bias. The reading on SSI for cable sits at the most extreme reading for majors with a 2.1504, which favors the view that the British Pound likely has room to trade lower with 67% of traders are long. We use our SSI as a contrarian indicator to price action, and the fact that the majority of traders are long provides a signal that the GBPUSD may continue lower. The trading crowd has grown further net-long from yesterday and last week. The combination of current sentiment and recent changes gives a further bearish trading bias. 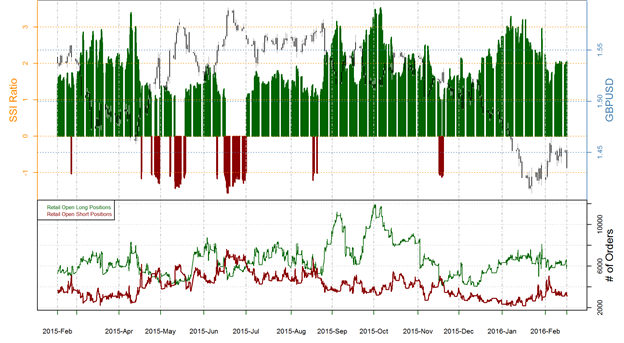 I am looking to sell GBPUSD at the market with a stop above the recent corrective high. Given the fear of holding long Sterling from a fundamental point of view, the sell-offs could be aggressive so be careful entering at the market on an extended move lower. Sentiment shows the move could have legs to the downside as retail leveraged traders continue to try and buy low against a strong trend. A daily close below 1.4230, the late January/ early February support would help validate the trade setup, and our attention would be turned to the two targets mentioned above. This target aligns with a favorable risk: reward ratio that our Traits of Successful Traders report found to be one of the best things a trader can do to ensure long-term sustainability in your trading.