2016 has been a confusing year for the Australian Dollar. Most of the uncertainly lies around how negatively impacted the Australian Dollar could be by China’s turbulence as they transit from a production based economy to a consumption based economy. However, the confusion now remains around the potential of capital controls so that the PBoC doesn’t have to spend as much of the FX reserves as they have trying to support the currency from too much volatility. Recent readings from the PBoC show drawdowns of their reserves to be averaging a little north of $100B per month.

Should China work to prevent capital fleeing the country, Australia could be one of the worst affected by the decision. While the situation is pure speculation now, it aligns with the larger bearish sentiment in global risk markets where AUD often does not fare well. Even though the US Dollar has not fared well in February as speculation about rate cuts start to build, the head of the Fed was not dovish enough on Wednesday’s testimony to support many of those USD bearish claims.

The culmination of this trade working out would be the US Dollar having a future that is not priced in with hikes coming from the Fed this year and the AUD being hurt by the potential for China to curb capital flows from citizens. Such a move could also bring the RBA to look at cutting interest rates from an elevated level from many other central banks.

Should the scenarios come onto the scene, we would likely see new lows in the AUDUSD. If we do not, we likely will not, and that is why this in an entry order based trade and not an “at market” trade.

Technically, a few points stand out to me, least of which is that is coming up against elevated levels on the 1-yr Standard Deviation Channel. The channel is one reason why I think selling a breakdown makes more sense than selling a pull back. Additionally, the price has also come into the 78.6% Fibonacci retracement at 0.7220 level before turning back lower 260 pips. If the first move lower was a sign of things to come, the trend lower could resume soon. 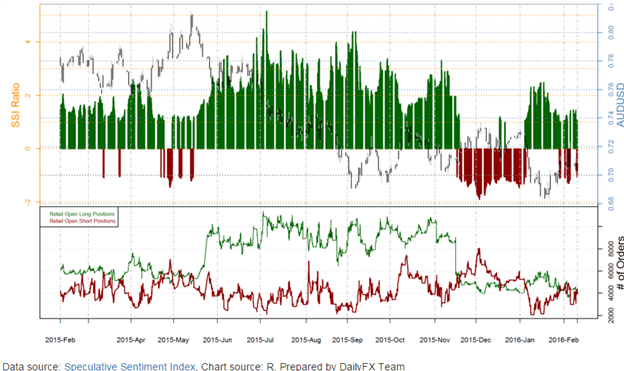 The ratio of long to short positions in the AUDUSD is nearly flat lining at 1.04 as 51% of traders are long. Short positions are 7.2% below levels seen last week. We use our SSI as a contrarian indicator to price action, and the fact that the majority of traders are long gives signal that the AUDUSD may continue lower. The trading crowd has grown further net-long from yesterday but unchanged since last week. The combination of current sentiment and recent changes gives a further bearish trading bias

I am looking to sell AUD/USD if we break below the February 9 low of 0.6972. I would like to sell on a break of support as opposed to a retracement because the sentiment doesn’t provide its usual cues and if the USDOLLAR doesn’t strengthen (needed for trade to work) the price could move back up to the top for the longer-term range in the 0.7300/7400 zone. Upon this sellable break, a stop would be placed 100 pips above entry near 0.7092. The target is at 0.0.6775, which is a 127.2% expansion of the August 24-December 4 Range. This target aligns with a favorable risk: reward ratio that our Traits of Successful Traders report found to be one of the best things a trader can do to ensure long-term sustainability in your trading.