-Short-Covering In Euro May Be Done, Time For Shorts to Jump Back In?

-FXCM’s Trading Book Shows That Upside May Continue Yet, So Validation Is Needed

EURUSD has taken center stage in December on the back of a 463-pip rally on December 3, 2015. However, one has to wonder if it was a flash in the pan or the real thing. Excitement is building off a 4-big figure move in the biggest cross in FX, but the fact remains that EUR could remain a funding currency against higher yielding currencies going into next year with a negative deposit rate. With the Federal Reserve raising rates and move leaving credit risk debt (i.e. favoring secured higher yielding treasuries), the $EURUSD could continue to see a bid to the downside.

The big question many are asking of the Federal Reserve now is, ‘how will the flight path be spelled out? Which we will find out on December 16at the FOMC rate announcement meeting where they are broadly expected to hike rates, and discuss plans for future hikes. If it appears the Fed are comfortable with multiple hikes should the data remain supportive, the EURUSD downtrend could extend past the March lows of 1.0460.

To Learn What FXCM’s Most Successful Traders Do on a Consistent Basis,sign up for our free guide here.

You can see via the Euro Bund that government debt is still bid, which shows that traders are not completely unwinding the EUR trade, regardless of the shocking reversal last Thursday.

Technically, the December 3 was a wonder to behold. The move matched the March 18 spike nearly pip for pip (462 vs. 463 daily pip range). Additionally, an Andrews Pitchfork price channel (red) shows upper parallel line resistance that aligns with the Weekly R1 Pivot resistance. Beyond the Weekly R1 Pivot is a strong cluster of resistance. A break above the cluster of resistance would invalidate the bearish view for the near future. The resistance level of 1.1060/90 includes 50% of the March-August Range, the January Low, the September 4th low, and the 100-day moving average. Should the upper red pitchfork line fail to hold as resistance, a move toward the October high of 1.1495 targets would be increasingly likely.

Adding to Andrew’s Pitchfork & action price resistance, an Elliott Wave count could be showing that the 12/3 unwind was a simple sharp corrective move. While there was little simple to those on the wrong side of the trade last Thursday, a hold of 1.1090 and a break below 1.0795 could well argue that the 5-wave move lower (5-waves completes a trend move as per Elliott Wave) is still in progress. By most account, a 5-wave move lower in progress would favor new lows. 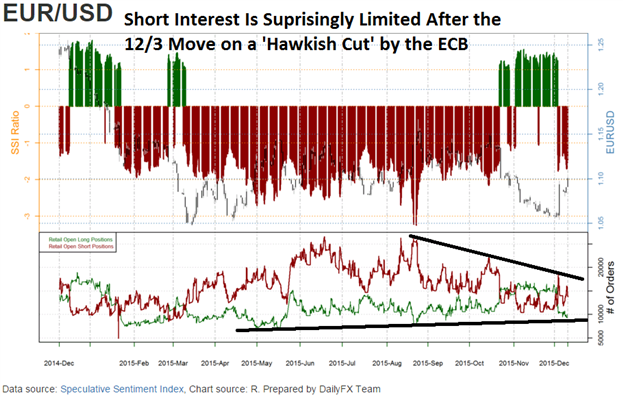 This trade is a bit forward thinking, but if 1.0795 breaks while EURUSD did not break above 1.1095 then it appears, the downtrend is still well in play. If we are moving to new lows, and entry at 1.0795 would provide a YTD target of ~350 with potentially a move lower still ahead. Further confirmation would come if sentiment were to flip positive again as there is an inverse correlation to retail crowd-positioning and strong moves and the retail crowd tends to be short-term focused. Either way, a break above 1.1060/90 mentioned above with retail staying net short could argue that a low is in for EUR and that fighting FX’s newest uptrend would likely be futile.