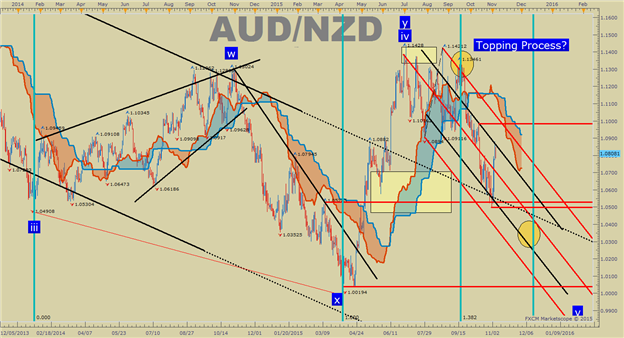 AUD/NZD caught the attention of many FX traders this week. After a strong move lower in the cross, three data points came out that change the immediate direction of AUD/NZD. First, the Reserve Bank of Australia found a rate cut unnecessary as global economic conditions have not worsened. This provided a bid for the Aussie that hasn’t had much followed through. Next, to disappointing data points out of New Zealand surrounding employment and a dairy auction that missed economists expectations and sent the NZD lower almost across the board.

Those three developments led to a sharp rise from 1.05 to nearly 1.09 in a few days to begin the month of November. Naturally an aggressive move may get traders excited. However, this move went into channel resistance, and a move lower may be next. Given the longer-term strength of the NZD, thanks in large part to equity strength from late August, AUD/NZD may soon continue lower, and the recent spike could be seen as a gift to bears without exposure before the news prints.

Technically, two points stand out to me, least of which is that price is below the daily Ichimoku Cloud. Additionally, and Andrews pitchfork price channel (red) shows internal slope resistance that has limited price upside recently. Should the pattern hold, a breakdown toward the October 30thlow is likely near.

This morning, higher stock prices out of China in greater Asia provided a bid and risk trade, which boosted the Kiwi while AUD has seen recent gains reversed. Another supportive component for a medium-term NZD bias is that sovereign 2Y rate spreads favor NZD by roughly 68bps. Therefore, once the news effect wears off, capital may flow back into NZD from AUD, especially after the dovish remarks from RBA Governor Glenn Stevens last night.

While this is not a long-term call on the direction of AUD/NZD, the preferred downside minimizes the impact of an uncertain October payroll number on Friday. The print could set the tone of the FX market until the December FOMC meeting on December 16 where the Federal Reserve may look to raise rates for the first time since 2006.

You’ll also note a timing window that caught the recent downturn on AUDNZD. The 38.2% Fibonacci Time Cycle extension of the two lows in January 2014 & April 2015 aligned with the lower high pivot on September 14th. Given the drop in the pair on AUD/NZD during that window, the downside remains preferable until resistance levels break.

Looking to sell on strength, price around the prior lower-high of 1.0880 would trigger a sell with a protective stop at 1.0985. The target is the Median line at 1.0690. This aligns with a favorable risk: reward ratio that our Traits of Successful Traders report found to be one of the best things a trader can do to ensure long-term sustainability in your trading.