What happened to the JPY? After August 24th, it appears to have had a hard attack or to have gone on vacation against the USD. In fact, USDJPY is currently posting its narrowest Volatility Band range in over three decades. The last few times we’ve seen this narrowing on the JPY, the subsequent breakout was worth at least 2.5%. Another recent example is SPX500 that set the narrowest Volatility Band range since 1993 this summer before breaking down aggressively. A similar move could bring amazing JPY strength.

EUR, on the other hand, has its own set of worries. In a word or two Quantitative Easing, which the ECB may embark on this quarter due to the weakness in Germany and “developments abroad.” This combination of no volatility in the JPY and potential ECB action makes EURJPY specifically interesting. However, it’s worth noting there is also the hope of more BoJ action. This central bank anticipation is why the trade is shorter term in nature.

Due to Ichimoku, we prefer to fade upticks while the daily cloud caps price and look for a move lower towards support in the 133.15/132.15 area. Move below would signal downside towards our targets near the 132.20 range lows and then further out towards 129.30. Nearby resistance is at 135.85. 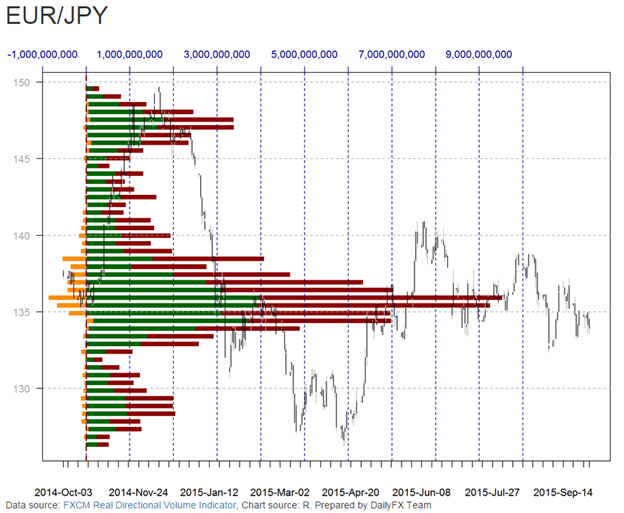 EURJPY likely would be without much support from a strong drop if we break below 1.33/132 zone. This significant Volume at Price zone is worth watching if we put further pressure due to JPY strength. . Considering the macro backdrop (e.g. risk-off as Emerging and Developed Markets recede economic growth), a break below this level, most notably 132.15, could open the floodgates of JPY buyers.