The Japanese Yen saw a significant bout of weakness through the first half of the year, with rising global growth forecast in key economies as vaccination campaigns were seen dampening the pandemic’s impact. The British Pound benefited greatly from that view due to the country’s advanced progress in vaccinating its population.

The British Pound reached its 2021 high in late May at 156.08. GBP/JPY has eased since then, dropping over 1% in the third quarter. The Delta variant started to spread rapidly over the summer months, with the United Kingdom being one of the first countries to see a new wave of infections driven by it. Other major economies followed, with a fresh wave of infections in the United States starting shortly after the one in the United Kingdom.

Covid cases began to ease in September, and health policy experts expect that trend to continue as vaccinations increase and the reservoir of unaffected and unvaccinated people shrinks. However, the Delta strain did more economic damage than initial assessments forecast. This is pushing back the timeline on a strong recovery.

The Bank of England (BoE) noted in Sept. that growth has slowed since its Aug.policy meeting. That follows an unexpected slowdown in July when GDP missed estimates after crossing the wires at 0.1% m/m. The unexpected contraction put UK growth behind the Eurozone. Moreover, rising prices pose a major threat to consumer consumption.

The United Kingdom, in particular, faces a unique threat from price pressures. This forced BoE policymakers to take a hawkish stance at the September MPC. The British Central Bank upgraded its inflation forecast and now views prices possibly exceeding 4% in Q4. While that bolsters rate hike chances, monetary tightening is primarily aimed at inflation despite a fully recovered labor market – not the ideal scenario given the uncertainty in risks. This opens the door for a period of slow growth amid high inflation. The pace of any hikes is likely to be slow and cautious, which may not do enough to tame price growth.

Meanwhile, the Japanese Yen may benefit from inflationary pressures if they continue to accelerate through the fourth quarter. Global supply chain problems caused by Covid-related issues, including a backlog for shipping containers, mining and farming disruptions, as well as sporadic seaport and railhead closures look like they will last longer than economists initially predicted. Similar to the UK, these price pressures – should they accelerate – pose significant growth worries. The Yen would likely benefit as higher prices weigh on forecasts.

China’s real estate market represents a big question mark.Real estate titan Evergrande Group, and a series of looming potential defaults, threatens to upend China’s fragile housing market. Evergrande failed to pay several offshore creditors’ coupon payments in Sept., starting the 30 day countdown to a formal default. Another round of interest payments to offshore US Dollar bond holders is due Oct. 11, which may spark another round of risk aversion.

While the threat of systemic risks to the global financial system is small, the knock-on effects of a significant slowdown in the Chinese housing market is likely to dent the country’s growth prospects near term. That would also likely drag on global growth given China’s position as the second largest economy. This safe-haven Japanese Yen would likely benefit under this scenario. 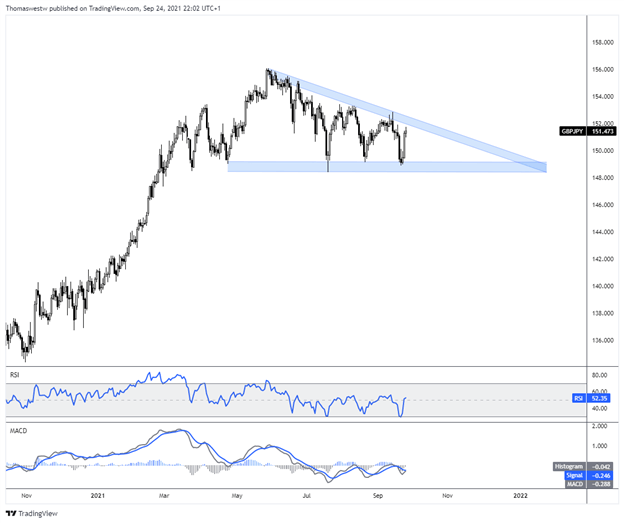 A Descending Triangle pattern took shape after GBP/JPY topped in May, subsequently forming a series of lower highs against a horizontal support level. The pattern suggests a reversal from the preceding uptrend is in the cards.