The United Kingdom’s Covid response, particularly the pace at which it has vaccinated its population, has been optimal compared to many other major economies. Comparatively, Europe’s response has been anything but smooth. Highlighting the disparity between the UK and EU’s vaccine statistics illustrates the stark difference between the two countries. As of March 28, nearly 58% of the United Kingdom’s adult population received a first-round vaccination. The EU, in comparison, stands at just over 12%.

Now, Europe is facing the grim reality of a third virus wave, and renewed lockdown restrictions, which will undoubtedly hamper economic activity further. Meanwhile, the UK is rolling back restrictions, and given the efficacy of its vaccine rollout, will have rolled back all constraints on social distancing this June. Moreover, the UK government soon plans to announce its strategy to reintroduce international travel.

If the EU’s vaccine rollout woes aren’t enough already, the 27-member bloc now faces a political crisis surrounding its domestic vaccine supply, which interestingly enough, is the primary source for England’s supply. There lies the crux of the problem. The EU has exported over 40 million doses outside of its borders, according to European Commission President Ursula von der Leyen. This has caused disdain among EU residents, and some are now calling for a more nationalistic policy surrounding its vaccine supply.

Regardless, much of the damage is already done, and even if the EU can better control its bleeding supply of vaccines, it will still lag behind the UK. The economic implication being that the UK will return to its full potential well before the EU likely will. The EU can enact tighter restrictions to control vaccine exports, but the politics among leaders across the Eurozone are not aligned for that. Furthermore, the bloc risks enacting a tit-for-tat vaccine trade war with the United Kingdom, a country that supplies critical vaccine ingredients to manufactures.

Overall, the fundamental backdrop favors more downside for EUR/GBP, with the issues facing the Eurozone appearing to heavily outweigh the United Kingdoms. If that isn’t enough, the EU recovery fund faces a fresh legal challenge from Germany’s Constitutional Court, one that threatens to delay the fiscal buffer by weeks or even months. With the ratification deadline only months away and European markets appearing unaffected thus far, the legal snafu may serve as additional downward pressure on the Euro if the issue isn’t quickly resolved.

EUR/GBP has recently begun to test a level of support stemming from the bottom of a sharp intraday drop back in February near the 0.8539 level. Breaking below this support would likely see prices fall to a descending trendline formed through the second half of 2020. The most bearish scenario would see a move below this support level, which could open the door for a drop to February 2020 levels circa 0.8295.

To the upside, the 26-period Exponential Moving Average appears to be serving as a level of resistance. The long-term downward momentum appears well intact, with the MACD on the verge of crossing below its signal line. The Relative Strength Index (RSI) is also on the move lower as prices test support. Overall, EUR/GBP may be on the cusp of another leg lower. 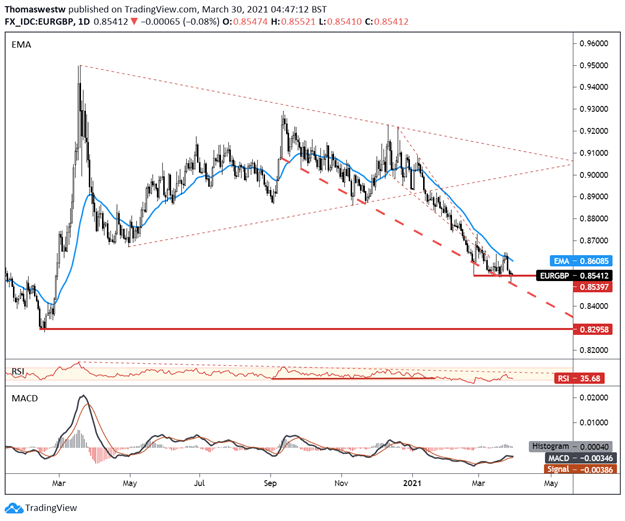