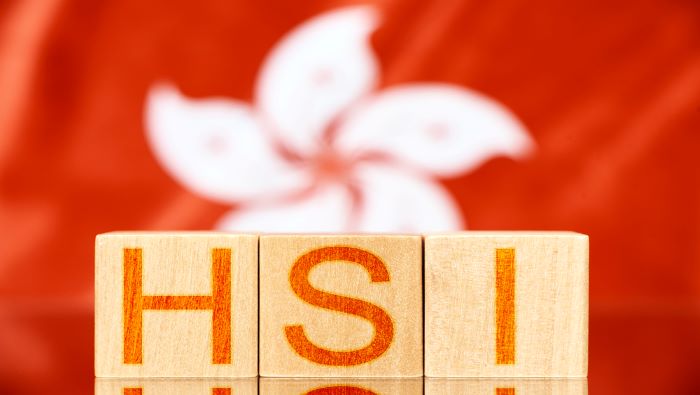 The Hang Seng indexappears to have turned sharply higher after a global lift in risk sentiment after China’s recent stimulatory efforts to stabilize the property sector.

Although, truth be told the index has been trading lower since early July, picking up speed last week as global equities sold off in response to hawkish sentiment expressed by numerous Fed officials.The Hang Seng index remains at relatively low levelsandhas also not been helped by a number of local factors which are certainly weighing the index down.

The dire, broader property sector and the recent drought experienced in China are starting to have an impact on local power supply and while the effects are not necessarily widespread, it adds more friction to the economic machine.

However, Beijing announced supportive financial measures in the form of a guarantee for the issuance of medium-term notes (debt financing) for property developer, Longfor Group Holdings. The latest stimulatory efforts follow on from news earlier this week that the one-year loan prime rate (LPR) was cut by 5 basis points to a record low of 3.65%. While the 5-year LPR was reduced for the second time this year, this time by 15 basis points to 4.3%. A more stimulatory environment tends to support equities.

It is with that backdrop that we take a look at the daily chart where we witnessed a rejection of the 19,180.This is a particularly significant level(refer to the monthly chart below)meaning it could act as a launch pad on the back for Beijing’s stimulatory efforts. Thus far the news has been well received as the index gapped up and closed higher. 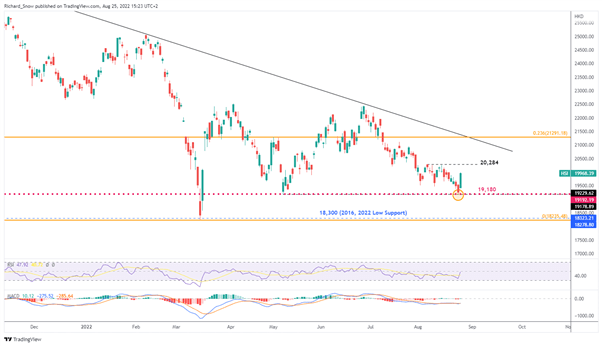 Zooming out, looking at the monthly chart we can see the significant level which has acted as support in the past, preventing lower prices to some degree.Price action tested this level yesterday and showed a sizeable rejection to move higher.It is with this impetus that we could see another move higher, towards the descending trendline ahead of Jerome Powell’s address on Friday at the Jackson Hole retreat. 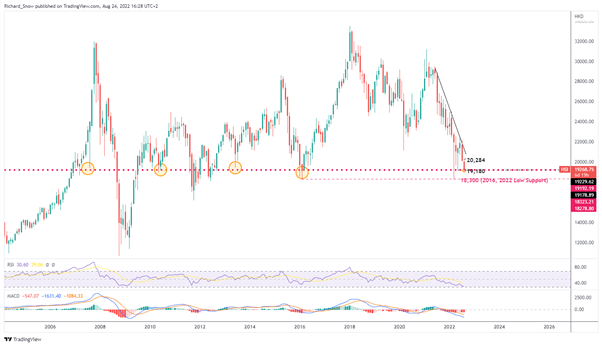 A Note on the Potential for Increased Volatility into the Weekend

Something to keep in mind however is the beginning of the Jackson Hole Economic Symposium which is set to get underway on Thursday with formalities, with the main sessions taking place on Friday and Saturday.The event has been seen by many as a pseudo-Fed meeting and has the potential to move markets.Markets will be interested in Fed chair Jerome Powell's speech on the Friday particularly as the Fed has moved away from forward guidance meaning a predetermined path for future rate hikes will be replaced by a meeting-by-meeting, data dependent approach.

Any hawkish or bearish perceptions are likely to have an effect on risk assets, such as equity markets, and therefore it would be reasonable to assume a spate of elevated volatility heading into the weekend.