Recommended by Richard Snow
See the DailyFX Q4 Top Opportunities in Our Guide!
Get My Guide

Global central banks are no longer just talking about reducing stimulatory purchases and raising interest rates – some have already started to put this into action. Below are some of the recent adjustments:

A lot of the ZAR appeal this year has centered around its attractive yield among its ‘riskier’ peers in the rest of the emerging market (EM) category. However, the tide is changing and South Africa’s attractive yield differential is likely to come under pressure as central banks in developed nations which are considered to be safer - like Norway’s central bank (Norges Bank) - consider rate hikes in the coming months.

In addition, the US Federal Reserve Bank is scheduled to meet twice in Q4 where revelations around tapering is likely to dominate the main talking points. 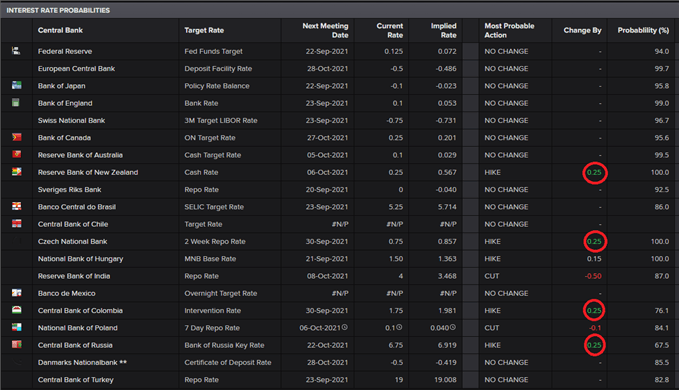 The economic outlook for SA remains a challenge as the southern-most African nation grapples with rising unemployment, sluggish GDP, lower commodity prices and a slow uptake in Covid vaccinations.

Unemployment figures for the second quarter reached 34.4%, the highest number since the Quarterly Labour Force Survey began in 2008.

SA GDP for the second quarter rose 1.2% compared with Q1 and marks the fourth consecutive quarter of positive economic growth. However, the economy has not yet reached the pre-pandemic level and currently equates to the same level experienced in Q4 2017. 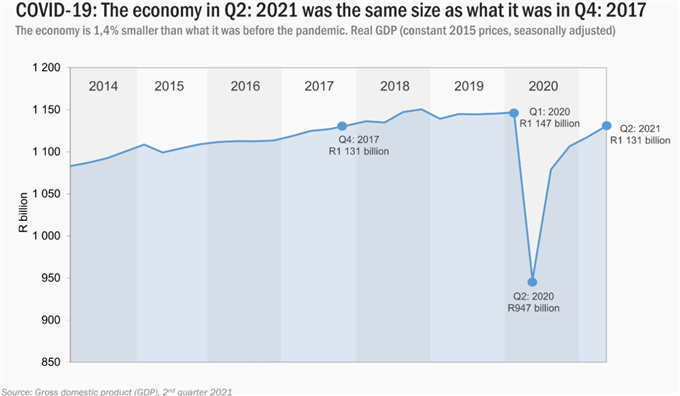 Vaccinations in South Africa have been made available to anyone 18 and older since August but only recently surpassed the 15 million mark. The South African population is around 60 million so there is still a long way to go before the economy is likely to fully open once more.

USD/ZAR dropped rather aggressively towards the 14.14 level which was always going to pose a challenge to continued selling as the level proved to be a rather stable level of support in the past. The sizeable bullish engulfing candlestick (highlighted in yellow) really set the tone for the bullish reversal which gained momentum over the following trading sessions. The upward momentum could be further fueled by US tapering speculation and dollar strength that is likely to follow as we head into year end.

A pullback towards the 14.50 or even 14.40 level would not be unusual when considering the rate of the recent advance and near overbought conditions on the stochastic oscillator. 14.50 or 14.40 may provide opportunities to enter the fresh uptrend. A supported move above 14.65 opens up the pair for a re-test of 15.00 and higher 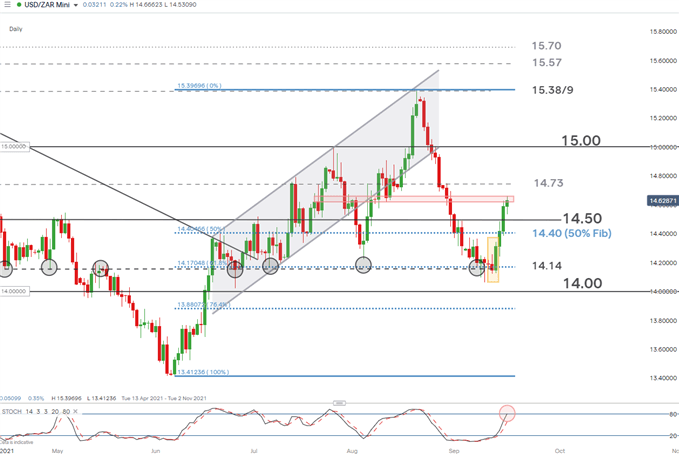 Recommended by Richard Snow
See the DailyFX Q4 Top Opportunities in Our Guide!
Get My Guide