Hints of a Brexit deal emerging earlier on Wednesday have garnered more traction with several sources echoing UK-EU negotiators have reached a trade agreement. The corresponding unwind of no-deal Brexit speculation has fueled a bid beneath the Pound Sterling and propelled spot GBP/USD price action higher by more than 130-pips on the session and up over 300-pips from its week-to-date swing low.

This follows reports earlier in the week of a last-ditch effort made by UK Prime Minister Boris Johnson to reach a trade deal with movement on fisheries, which has been a major point of contention between London and Brussels. Headlines crossing the wires from UK-EU officials today have pointed to a deal finally being reached and that it is now ‘just a matter of announcing it.’

GBP/USD is likely trading on its front foot with markets placing greater emphasis on improving Brexit rhetoric despite headwinds stemming from fears over the spread of COVID-19 and lockdowns. The Pound-Dollar currently hovers about 100-pips below Wednesday’s swing high, however, as Brexit trade deal optimism cools off a bit. This looks owed to a pause in Sterling strength while traders await official confirmation and legal text of the Brexit deal. Concerns about being able to ratify a trade agreement before the 31 December Brexit transition period deadline could be keeping bullish bets at bay as well. 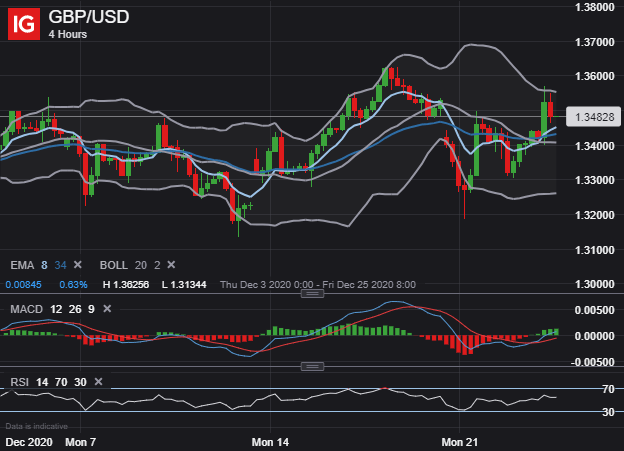 GBP/USD price action might face a bit of turbulence as these final details are ironed out. The 1.3400-handle stands out as a potential area of technical support that could provide the cable with a degree of buoyancy before the possibility of a deeper retracement toward the 1.3200-price level comes into consideration. That said, hearing a formal announcement that a Brexit trade deal has been reached from the horse’s mount (i.e. from UK Prime Minister Boris Johnson and European Council President Ursula von der Leyen) could recharge Pound Sterling buying pressure.

This brings to focus the possibility that GBP/USD bulls might take another stab at month-to-date highs around the 1.3550-1.3600 price zone on the back of Brexit deal confirmation. A heartier advance may be facilitated by increasing momentum and Bollinger Band expansion. To that end, the Pound-Dollar might have room to extend its climb considering the relative strength index is edging higher and remains comfortably below ‘overbought’ territory on a 4-hour chart. A sustained rally by GBP/USD price action into the new year could open up the door to the 1.4150-level underpinned by 2018 swing highs.