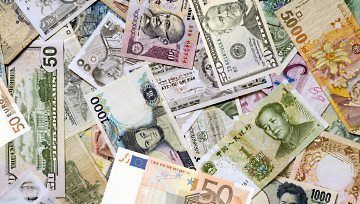 Spot USDMXN looks set to resume its bullish ascent as fundamental themes appear likely to tilt back in favor of the US Dollar. The Mexican Peso has failed to advance against the US Dollar with conviction despite broad weakness in the greenback as of late – largely driven by dovish Fed expectations. This could be attributable to Mexico’s rapidly declining economy with outlook turning increasingly pessimistic. Most prominently, Mexico GDP contracted back in Q1 and the country’s GDP growth estimates continue to receive downward revisions.

In fact, Mexico’s central bank Banxico cut its 2019 GDP forecast back in May while earlier this week the IMF lowered its own GDP growth forecast for 2019 Mexico GDP growth a staggering 0.7% with the economy now expected to grow less than 1% this year. Also, with the abrupt resignation of Mexico’s Finance Minister Carlos Urzua, another layer of uncertainty is thrown into the mix. As such, bullish prospects for the Mexican Peso continue to dissipate – even in spite of the USMCA trade agreement’s probable ratification – as Mexico’s discouraging economic and political landscape look to weigh negatively on its currency.

Shifting to the other half of the equation, the US Dollar could record an episode of resurgence if the Federal Reserve provides the market with upbeat outlook following the central bank’s first rate cut in over a decade likely coming at the July FOMC meeting. The upcoming Q2 US GDP report could serve as a bellwether to whether or not the Fed will ease monetary policy further or if it will take a more hawkish stance than the overzealous dovish bets currently priced by markets.

Also, the possibility that that the long-awaiting USMCA deal fails to garner legislative backing cannot be discounted and poses more of a threat to the Mexican Peso than it does the US Dollar. Additionally, there is an eminent risk that US President Trump threatens to raise tariffs on Mexico to push his political agenda. 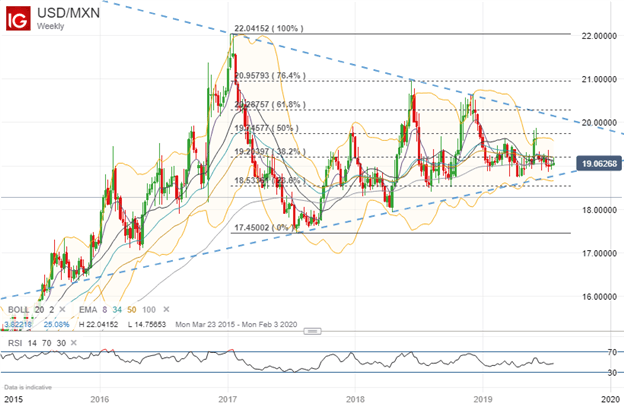 The technical outlook for spot USDMXN appears quite attractive as well. Turning to the charts, technical support provided by the bullish trendline dating back to late 2015 looks to provide the currency pair with a strong degree of buoyancy. At the same time, spot USDMXN downside momentum has waned with the RSI showing potential of trending higher. That said, the 38.2% Fibonacci retracement of the currency pair’s 2017 trading range could serve as a headwind for spot USDMXN bulls around the 19.200 level. 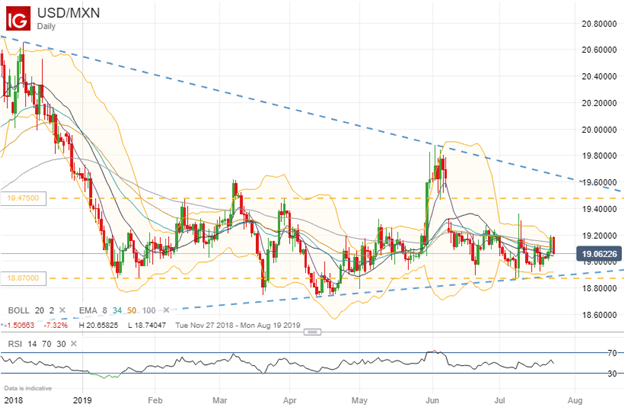 Honing in on a closer time frame, support from the bullish trendline becomes more evident with spot USDMXN shown holding the series of higher lows back in April and again earlier this month. Also, it could be constructive for spot USDMXN price action to fill the conspicuous gap lower printed early June. While holding the 19.000 handle will likely be key for bullish conviction to remain intact, the swing low in January 2019 near 18.870 could serve as a more appropriate stop loss for USDMXN longs. Looking back upward, the area around 19.475 could be a possible topside target.