The Australian Dollar has had a rough year to date, falling more than 4.5% versus the US Dollar. Widespread concerns regarding global growth and the US-China trade war have worked to pressure AUD/USD, alongside interest rate cuts from both currency’s central banks. Although AUD trades near multiyear lows and has enjoyed formidable support at the 0.67 level, an impasse in US-China trade negotiations could see AUD/USD fall under renewed pressure. 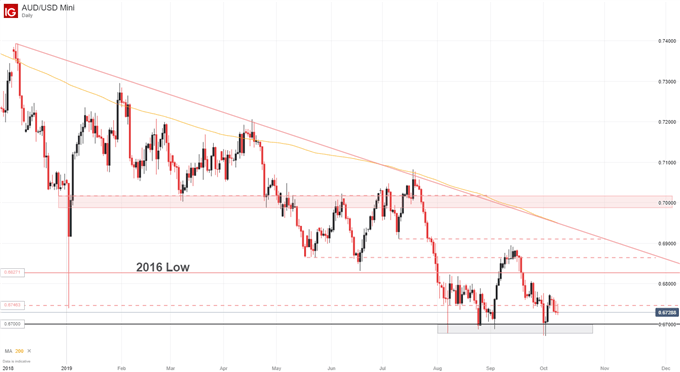 Consequently, I maintain a bearish bias on AUD/USD and suspect a break beneath the longstanding support at 0.67 is due. Repeated tests of the level do not speak to bullish confidence and despite their initial failures, I believe bears will eventually win out in the ongoing battle. If support at 0.67 is broken, a bearish extension may materialize which could see AUD/USD approach levels not seen since 2009.

Interested in other forms of technical analysis? Join IG US and DailyFX for a Webinar with John Bollinger, who created the popular Bollinger Bandstrading tool.

Given the distinct lack of noteworthy support beneath 0.67, areas of interest are difficult to gauge. Therefore, the position should be watched closely so that its size can be tailored and a trailing stop can be employed if a break lower does occur. 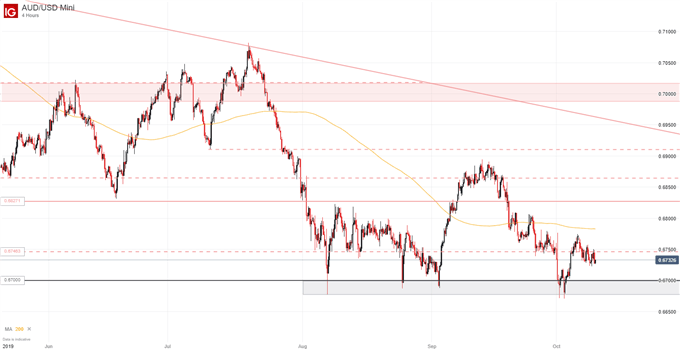 To the topside, however, a possible area of invalidation exists slightly above the 200-period moving average on the 4-hour chart, around 0.6827 which marks the pair’s 2016 low. Recent price action has seen 0.68 offer a modicum of resistance, so a break of the level and the 200-period moving average, followed by a test of the 2016 low would seriously undermine a bearish argument for the shorter-term. 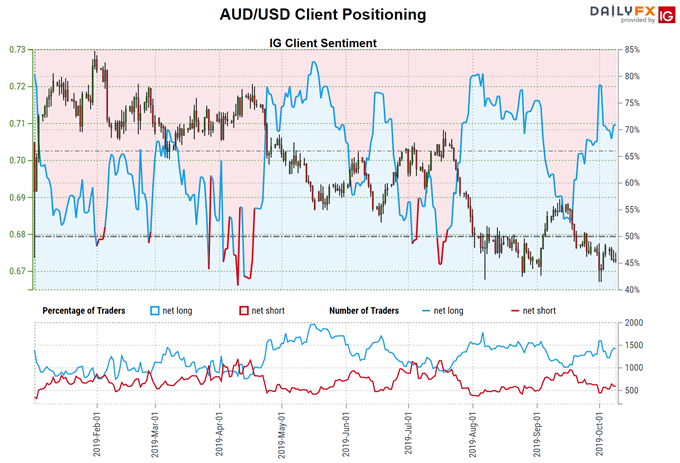 Finally, retail trader data shows 69.9% of traders are net-long with the ratio of traders long to short at 2.32 to 1. We typically take a contrarian view to crowd sentiment, and the fact traders are net-long suggests AUD/USD prices may continue to fall. For updates on this analyst pick or for a deeper look at IG Client Sentiment, follow on @PeterHanksFX Twitter.