Three weeks ago I highlighted a bearish trading opportunity on USDCAD amid a series of failed tests at resistance. Evidently, the probes continued but bears stood their ground affording the pair little progress higher. Following a relatively hawkish monetary policy stance from the Bank of Canada, the US Dollar broke lower against its Canadian Dollar counterpart on Wednesday and continued its descent on Friday as I outlined in my webinaron Thursday.

Consequently, USDCAD has delivered a confirmed break of the ascending trendline that originated in mid-July and the horizontal support from March. Also slipping beneath its 200-period moving average, bearish momentum may continue which will allow for adjusted areas of interest and invalidation. With the initial invalidation zone comfortably out of reach, the secondary invalidation point will now reside near the 1.3250 level – coinciding with the horizontal resistance from March. 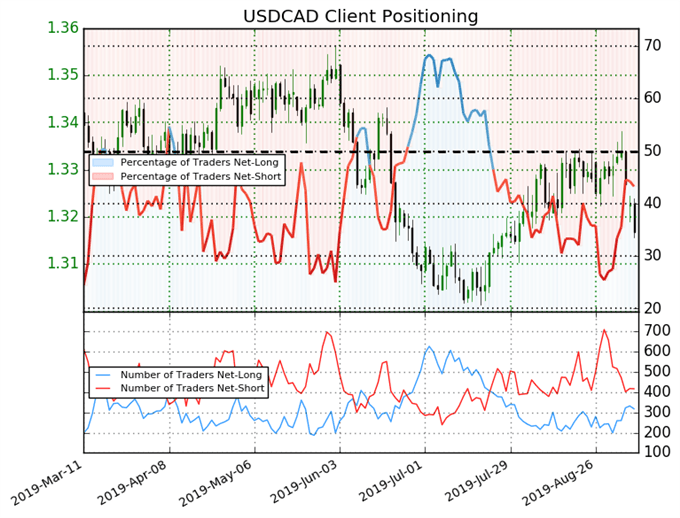 Likewise, areas of interest should also be adjusted lower. Given that IG Client Sentiment data reveals retail traders are becoming more bullish, the converging positioning suggests the pair could be destined for a deeper reversal. If retail positioning flips entirely to the bullish side and continues to diverge, USDCAD could look to test July lows.

Therefore, a new point of interest on USDCAD can be found near the support offered in mid-July around the 1.3016 level. A sticking point could materialize at the various swing highs in mid-July around the 1.3146 area but seems unlikely to single-handedly rebuke a continuation lower. As price action unfolds, follow @PeterHanksFX on Twitter for updates and analysis on this USDCAD trading opportunity.