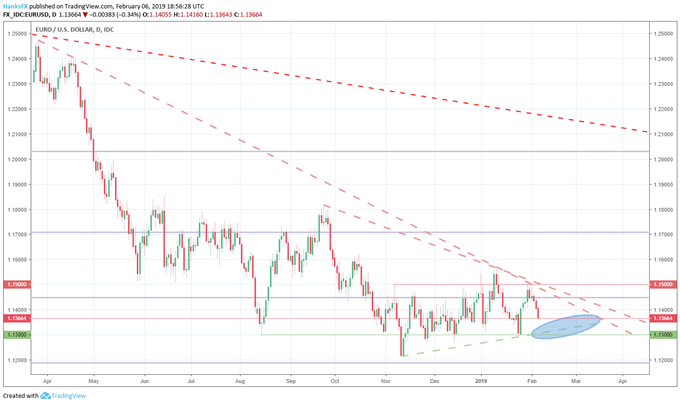 After months of congestion for EURUSD, the pair may finally choose a direction as technical levels converge and fundamental winds shift. From a technical perspective, the pair faces a plethora of resistance immediately above the current trading price.

Read the intermediate-term fundamental and technical outlooks for the Euro in the Euro Q1 Forecast.

A trendline from September 2018 has guided the pair lower in recent weeks and poses continued risk for bulls in the future. Similarly, a trendline from March 2018 has rebuked the pair multiple times. The 1.1500 price level also looks to pose some moderate resistance as the pair has failed to break the area in recent weeks. Finally, the Fibonacci retracement from the lows of January 2017 to the heights of February 2018 places the 50% level at 1.14480.

As far as support goes, the pair seems short-handed at first glance. A support trendline from November 2018 could materialize in the near future upon a third failed test and would bolster a bullish argument. In the same area lies 1.1300. The price was the August swing-low and has provided moderate support in the recent bout of congestion. A bounce off of one of these levels is critical for my setup.

Below the proposed trendline and 1.1300 support lies the 61.80% fib level at 1.11880. This level has not been tested for some time, but given the respect commanded by the other fib levels in the retracement, it would be fair to assume the .6180 level will act similarly.

With the technical landscape laid out, a bearish bias seems clear. That said, a series of higher highs and higher lows in the congested area could suggest some additional underlying support for the pair. Given that the pair has traded narrowly below resistance for months but has lacked a determined move lower, the case for an upside swing can be made. The fundamental outlook may bolster the argument.

A Dovish Fed – A Stronger Euro?

A remarkably dovish tone from the Federal Reserve in recent weeks should spur Dollar weakness as rate hike expectations have slipped considerably from the highs tagged by the pair in 2018. While the ECB remains more dovish than the Federal Reserve and facets of the European economy are nearing recession, I believe the stance of the ECB has been factored into the pair for some time.

Thus, a more recent and arguably dramatic shift by the Fed should generate a fundamental tailwind for EURUSD in the medium term. That said, the tailwind may prove an insufficient catalyst to push the pair through the multiple levels of resistance and therefore the trade will wait for bullish confirmation.

The long position will be contingent on a breakthrough of resistance. Both the trendlines from March and September of 2018 will need to be broken before I will consider the trade a possibility. Similarly, I would like to see the pair respect the proposed support trendline from November 2018 and the 1.1300 level.

Ideally, I would like to see the price moves materialize before the end of February. Once a close below support or above resistance has occurred, I will provide updates and key price levels. In the meantime, follow me on Twitter @PeterHanksFX for commentary and updates on this trade and others.