AUD/USD Technical Analysis: Signs of a Top are Showing, Set to Move Soon

AUD/USD is trading below the area surrounding 8000, a level that has been in play since at least the late 90s. And even if you don’t want to give it respect that far back, it has clearly been influential since 2015, when it acted as resistance following a failure to hold, then once again in 2017 and 2018. The high for this year is at 8007 to be exact.

The developments around this long-term threshold are of interest in the short to intermediate-term. A topping head-and-shoulders pattern is in the works, with the possibility that yesterday’s rejection just above 7800 (an impactful intermediate-term level) acting as the right shoulder. A break below the neckline is needed to confirm the pattern, a lower-low below 7531 should do the trick.

This could lead to a sizable decline as long-term resistance proves to be a significant ceiling. The height of the pattern implies a measured move of about 500 pips from the neckline, or a drop to around 7000. The 200-day and 7432 would be the first levels to watch along the way.

Should we see AUD/USD continue to hold sideways and fail to trigger the head-and-shoulders pattern, a clearance above 7849 is needed to turn things more positive. We have seen strong price reactions around the 7800/50 area and so a breakout above will be a meaningful event. Ultimately, though, for that trend to pick up steam a weekly or monthly close solidly north of 8000 (8150+) will be needed to leave behind long-term resistance.

For now, in a bit of wait-and-see mode, but given the extended sideways move we are seeing it appears likely to be some activity on the horizon. 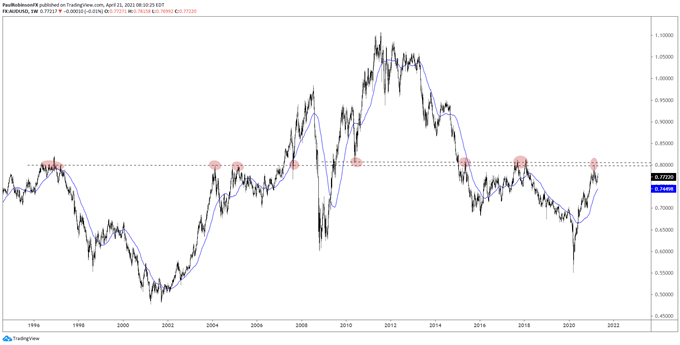 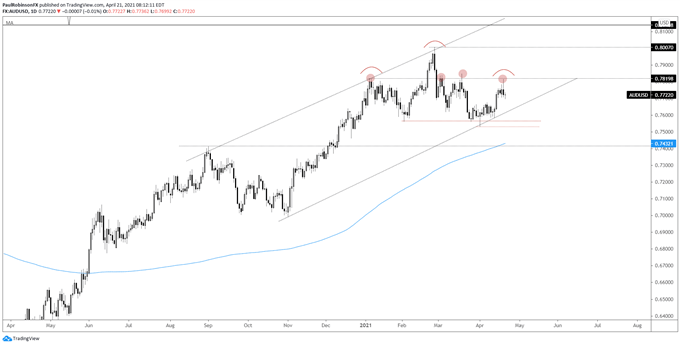