The following set-ups are a couple of the higher conviction opportunities we looked at in yesterday morning’s webinar, and since then have broken through critical levels.

Check out the DailyFX Q3 Japanese Yen forecast for our intermediate-term fundamental and technical perspective.

USD/JPY has been working on an ascending wedge for the past 6 weeks or so, edging closer and closer towards a trend-line running down from 2015. Yesterday, it broke out of the wedge and currently trading above the 2015 trend-line.

While price is above the long-term trend-line on a daily basis, a weekly close above the trend-line will go a long way towards adding conviction given the trend-lines 3 years in duration. Full clearance should have USD/JPY rolling towards the mid-11400s/500. The preferred approach on this end is to look to dip opportunities given the already extend

A break back inside and below the lower-side of the wedge and trend-line off the March low will negate the bullish breakout, and given the fake-out breakout, potentially bring into play a powerful move lower. Low probability given the current strength, but we’ll update on this scenario should it come to light… 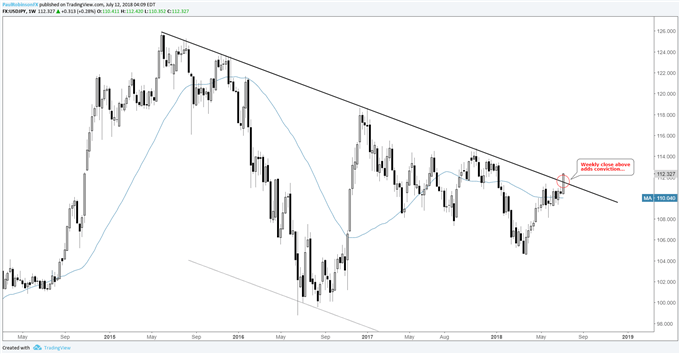 Check out these 4 core tenets for Building Confidence in Trading.

CHF/JPY has also been working on a similar wedge formation, but with a twist. Price action since March has also taken on the shape of an inverse head and shoulders, not an all that uncommon occurrence for an H&S to also resemble a wedge, or vice versa. In any event, the top-side breakout brings the same – so what you call it doesn’t matter, it’s just word play.

The measured move target (MMT) based on the depth of the pattern(s) point to a move near 11600. Prior to the MMT is a trend-line running down from the January 2015 high (created shortly after the SNB fiasco). Given this is a real level and not one based on pattern symmetry, we’ll run with that as the first line of major resistance to watch, and thus the initial target.

Right now, CHF/JPY is contending with resistance from last year (& 200-day), but beyond there, there isn’t any meaningful price levels to keep CHF/JPY from trading to towards the target. A failure back inside the pattern, and ultimately below the trend-line off the April low would be total invalidation and open up the possibility of a short trade (similar to USD/JPY on a failure).

***Updates will be provided on this idea and others in the trading/technical outlook webinars held at 9 GMT time on Wednesday and Friday.