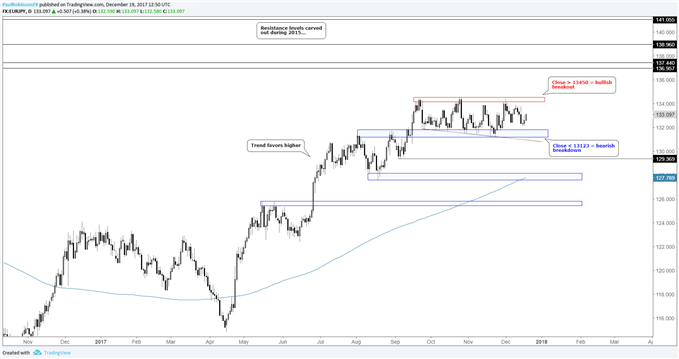 Volatility across the FX-spectrum (and other asset classes too) has declined sharply, with EUR/JPY as a prime example of the crush in volatility. Current conditions favor low-volatility strategies, but that won’t last forever and a material breakout could be nearing…

Visit the IG Client Sentiment data page to see how retail traders are positioned in key FX-pairs and markets.

EUR/JPY 1-month implied volatility is at 5.85%, the lowest level since the summer of 2014. The low-volatility environment has created an impressively persistent range lasting three months and counting. We’re seeing a push to the upper portion of the range at this time. But given the lull in markets which could dominate trade through the end of the year a little more time may elapse before enough market participation comes in to push euro-yen out of the range. As long as it persists it favors fading top and bottom-side levels.

Once a breakout develops, and one eventually will (ranges don’t last forever), we could see a good amount of momentum. The broader trend since earlier in the year favors a top-side breakout, but we can’t yet rule out a breakdown. Instead of predicting when the range will end and which direction it will be resolved, a reactionary approach will be taken.

The range is about 300 pips in height, which implies a measured move of that amount. But given the length of time EUR/JPY has been coiling and how JPY-pairs can garner momentum once they get rolling, it seems likely the move could be significantly larger. On the top-side there are resistance levels from 2015 from around 13700 up to 14100 to watch. On the downside, ~12900 down to ~12550.