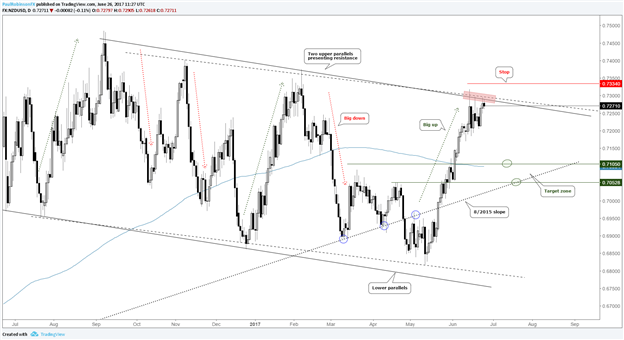 What’s driving the FX market? Find out in our trading guides.

NZDUSD has rallied impressively over the past six weeks, running higher by over 500 pips from a nearly year-long lower parallel to a pair of upper parallels. The push higher since Thursday smacks of a retest of the ‘blow-off’ type day seen back on 14th, with a key reversal-day on the 19th sandwiched in between then and now. The price action, in of itself, is compelling, but the fact this is playing out at two parallels combined with the generally mean-reverting nature of NZD and risk/reward profile gives this set-up its attractiveness.

On a secondary note, the most recent COT report shows large speculators ramping up their net long position to the highest level since before taking a dive lower in 2013.

At the time of this writing kiwi is trading at 7271. An entry at current levels with a stop placed at 7334 (above the 6/14 high) and a target of 7105 (above the 3/21 swing-day high & 200-day MA), offers an appealing risk/reward ratio closing in on 1:3. The slightly more aggressive target on this trade is to look for kiwi to trade down to the slope rising up from August 2015; momentum at the time of reaching the first target will dictate whether it is worth holding all or part of a position for the extra 50 pips or so.

For the short-term minded traders, looking for short set-ups on the 4-hr or hourly time-frame may be the preferred approach, trading within the scope of the broader idea.

Entry: At market, near current price

Paul conducts webinars Tuesday-Friday. See the Webinar Calendar for details, and the full line-up of all upcoming live events.