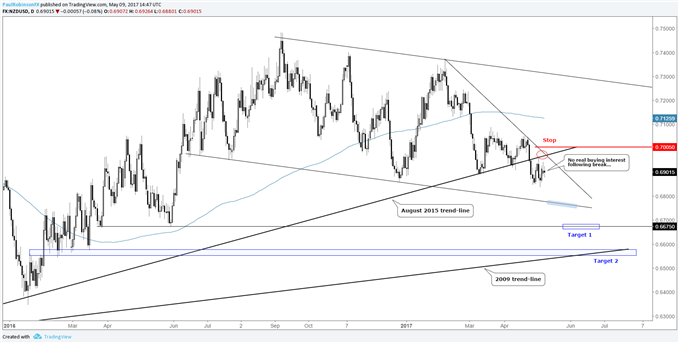 Heading into the year NZDUSD was on the radar as big-picture short. The confirmation noted was a clean weekly break below the trend-line rising up from the August 2015 low. This is an excerpt from our Top Trading Opportunities in 2017:

“Trading this theme: This is highly dependent on the time-frame which one operates on, but the idea on this end is to wait for a confirmed break [Aug ’15 trend-line] and then look to retracements on the daily chart.”

To start the year there was a speed-bump in this idea (a big bounce), but now kiwi is trading below the big-picture trend-line, and with that the stage is set for lower prices, and perhaps significantly lower.

The trend-line off the August 2015 low was clearly broken last month. Since then, a retest and rejection has taken shape. The lackluster price action after a break of a significant trend-line points to lower prices. Adding in an additional point of resistance on minor strength is the trend-line descending down from the Feb 7 high. Should kiwi pop higher from here the two lines could intersect to form a confluence of resistance. Placing a stop beyond this potential intersection makes sense in that a break above both lines could signify a trend change, even if only temporary.

Find out how to use IG Client Sentiment data in your analysis.

Looking lower towards the next levels of support, or targets; we first have a lower-side parallel connecting points as far back as June, which currently lies around the 6775 mark. Given the angle is in-line with the trend it is only viewed as a minor line of support, and expected to only bring a pause at the most before seeing additional losses. About 100 points lower from the lower parallel are a couple of inflection points from the first-half of 2016; the first at 6675, and more significantly are a cluster of lows arriving in the vicinity of 6575/50. This cluster, depending on the timing, aligns well with a trend-line rising up from 2009. For the long-term view and how gold and silver play into this outlook, check out the Trading Guides page.

Taking into consideration the invalidation point (stop) and points of support (targets), risk/reward is skewed favorably.

Heads up: Tomorrow the RBNZ meets, and while no adjustments are expected, and it’s likely we see limited volatility following the event, traders should still be mindful when managing risk.