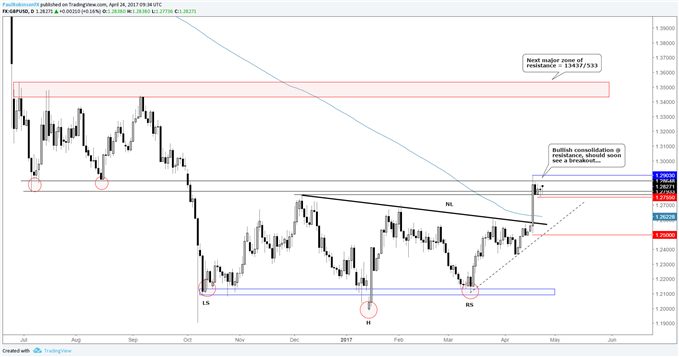 See our Trading Guides for Q2 forecasts for FX, commodities, and equity indices.

GBPUSD recently broke the neckline of an inverse ‘head-and-shoulders’ pattern forming since October. The breakout took cable up to a pair of bottoms created in July and August, and has held up well above the December peak thus far despite the big area of resistance in the vicinity of ~12800/900. This suggests we should soon see a continuation trade higher.

On strong clearance of 12903, there isn’t any substantial resistance arriving until swing highs from June to September in the 13437/533 zone, leaving a sizable amount of room for cable to run. For an initial trade, stops could be placed below Friday’s low of 12755. The distance from entry to the target and stop make for a compelling risk/reward scenario. A drop below the neckline breakout day low near 12500 will be required to undermine the broader bullish view.

The trade could take a few weeks or longer to fully mature, so traders with shorter-term time horizons can look to set-ups (i.e. bull-flags/consolidations/pullbacks to support) on the 1 and 4-hr time-frames for entries.

IG Client Sentiment data is supportive of higher GBPUSD prices, with retail traders selling into recent strength. See our Sentiment Guide on how to use the data.

Webinar Calendar for a schedule of upcoming live events with DailyFX analysts.