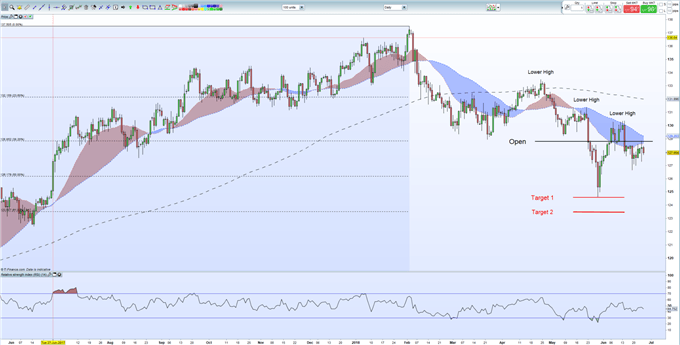 Check out our New Trading Guides: they’re free and have been updated for the third quarter of 2018

The global risk-off move is being fuelled by US President Trump slapping tariffs and trade barriers on two of the world’s biggest economies, China and the EU. And it is against this background that we look to go short EURJPY with the EUR under pressure from tariffs, amongst other things, while JPY is currently the favoured risk-off asset, ahead of CHF and gold. Current EUR negatives include potential US tariffs on its huge automobile sector, weakening growth, lowly inflation and a dovish monetary policy that is unlikely to see any rate hikes until at least Q3 2019. In addition, German Chancellor Angela Merkel, one of the rocks of the EU, is under pressure at home from within her coalition government to curb migration, while the new populist government in Italy refuses to let migrant boats dock.

On the technical front, EURJPYlooks set to push lower after making three lower highs in the last two months. We look to open the trade at what we think may become the fourth lower high and the 38.2% Fibonacci retracement level at 128.85and have a stop-loss at the third lower high – a break of which would invalidate the set-up – at 130.40. We set targets at 124.60 and 123.50 and would move our stop-loss down to our entry price on hitting our first target. The negative picture is given further credibility with the pair currently trading below all three moving averages, while the RSI is mid-market but pointing lower.

You may like to look at our Free Trading Guides which include Building Confidence in Trading, the Number One Mistake Traders Make and Top Trading Lessons.