Check out our new Trading Guides: they’re free and have been updated for the second quarter of 2018 and include all the major currencies, oil, gold and indices.

GBPCAD – Back on the Radar at Lower Levels

We entered this trade on April 20 at 1.7808 our limit order. We originally planned to run this trade up to 1.8060 and 1.8160. However we have changed our stance and are selling our position for a profit at the current market level of 1.7895 due to the current weakness in GBP. On Friday UK Q1 GDP is released expected at a lowly 0.3% compared to a prior 0.4%. However there is a small chance that first quarter growth may hit just 0.2%, a level that would hit sterling lower. We will take profit and watch from the sidelines.

Sterling is weaker across the board after the latest UK inflation data came in lower than expected, raising doubts whether the Bank of England will raise rates in May. While the market reaction to the CPI data was sharp, expectations for a May rate hike of 0.25% are still seen around 66%+. The Bank of England will be relieved that imported inflation, via a weak GBP, has seemingly passed through but will now need to take a harder look at domestic wage inflation. Official data released on Tuesday showed February UK weekly earnings (3m/YoY) rising to 2.8% from 2.6% in the prior month, while UK employment rose to a record high of 75.4% and unemployment fell to 4.2%, the lowest rate since 1975.

The sell-off in GBP is due more to the fact that market expectations of a second rate hike, expected in November, have fallen to sub-10%. This figure will change over the next six months with the August 2 ‘Super Thursday’ release on the policy decision, MPC minutes and the Quarterly Inflation Report likely to shape the BoE’s next move.

Potential negatives for the trade include a higher-than-expected Canadian inflation release on Friday – expected 2.4% vs 2.2% prior – and a pick-up in GDP after it contracted by 0.1% in January. The BoC kept rates on hold today at 1.25% and raised growth projections, adding that the central bank remains cautious with respect to future policy adjustments and will be guided by incoming data.

We look to enter the trade around the 23.6% Fibonacci retracement of the September – March move and the one-month low made on April 11. While the 20-day is converging on the 50-day moving average, a negative momentum set-up, the strong uptrend from early September is clear to see and unlikely to be challenged in the short- to medium-term. We have set our stop-loss at 1.7660 – the February 8/March 2 high/low - with upside targets at 1.8060 and 1.8180. The RSI currently sits at a neutral 48.0 around 10 points above the 37.5 level which has held since September last year. 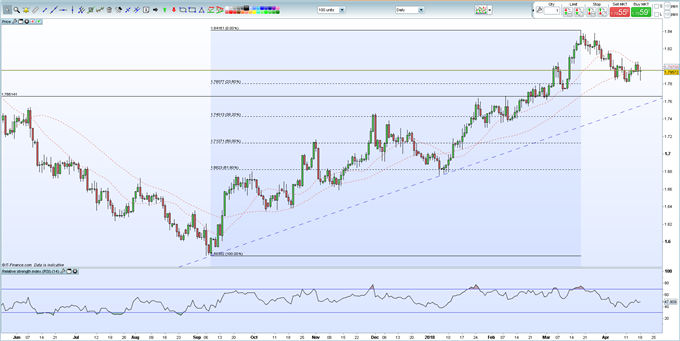 DailyFX has a vast range of resources to help traders make more informed decisions. These include a fully updated Economic Calendar, Educational and Trading Guides for 2Q 2018 and the constantly updated IG Client Sentiment Indicator.