It’s important to note that end-of-month / quarter flows can fuel increased intraday volatility and as such, added caution is warranted heading into the close of the week. With that said, here are the trades I’ll be following into the July open and setup’s we’re currently tracking on SB Trade Desk.

NZDUSD- Highlighted this setup on today’s scalp report – The near-term rally is at risk heading into topside resistance targets at 7135 & the 61..8% retracement of 7173 – both areas of interest for possible exhaustion / short-entries. A breach above the 2016 high-day close at 7290 (bearish invalidation) would be needed to fuel the next leg higher in kiwi.

USDCAD- I’m holding a short from just below the 5/9 swing high at 1.3015 with half the position closed at the weekly opening range low at 1.2966. Stops are at breakeven with the next downside target eyed at 1.2900/10- a zone defined by the 50% retracement of the Brexit rally & the 5/26 swing low. A break below this level keeps the short-side in focus with such a scenario targeting the key 61.8% retracement at 1.2847.

EURUSD- We’ve been stalking the Euro on SB Trade Desk for some time now with our outlook calling for a move higher to offer favorable short-entries. The pair failed to break above the monthly open this week at 1.1128 with more significant resistance seen at the 1.1224/30 Fibonacci confluence – both areas of interest for possible exhaustion / short-entries. Review Latest EURUSD Scalp Targets 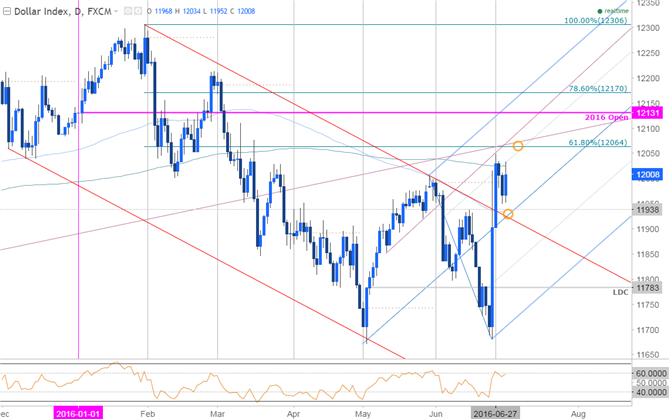 Here’s the USDOLLAR levels we’ll be watching into the July open – the index broke above channel resistance last week with the rally failing just ahead of a sliding parallel extending 5/11 low. Interim support & bullish invalidation rests at 11930/38 where a confluence of trendlines converges on the 100-day moving average. Key resistance stands at 12064 backed by the 2016 open at 12131. We’ll be looking for a possible move higher to flush-out into a larger scale decline. Continue tracking all these setup and more throughout the week- Subscribe to SB Trade Desk and take advantage of the DailyFX New Subscriber Discount!