GBP break higher on the cards

There was a big surprise from the Bank of England on “Super Thursday”. As expected, it kept the UK Bank Rate at 0.75%. However, two external members of its monetary policy committee – Michael Saunders and Jonathan Haskel – voted for a quarter-point cut and that had the inevitable impact: the Pound weakened and the markets raised the probability of a rate cut next year to around 80% from some 55% previously.

However, the impact on the GBP/USD pair and the EUR/GBP cross was remarkably mild, suggesting that the next big move in Sterling could be to the upside as the chances of a no-deal Brexit recede. Moreover, as BoE Governor Mark Carney, commented: “It’s become possible that the picture in the UK could change, with the recent UK-EU withdrawal agreement creating the prospects for a pick-up in UK growth.”

As the two-hour chart below shows, the surprise split on the MPC failed totally to lift EUR/GBP from its recent very narrow trading range and that leaves the downside exposed. 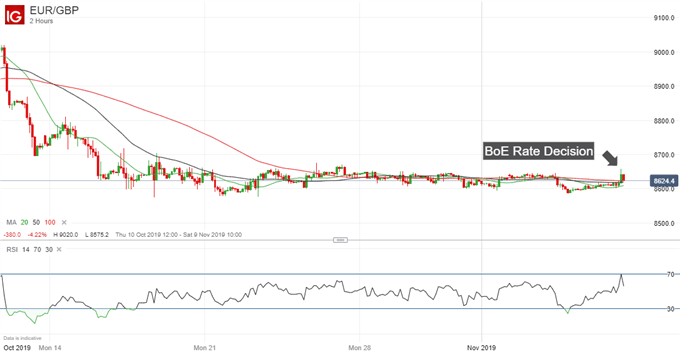 EUR/GBP is arguably the purest way to trade Sterling as the GBP/USD pair is buffeted by events affecting the US, including the US-China trade dispute and the upcoming public hearings that could lead to the impeachment of US President Donald Trump.

The key support level to keep a close eye on is 85.75 as the price has fallen several times to the 85.75/85 region over the past month but has failed to break through to the downside. If it were to, there is little further support ahead of the May low at 84.88 and a swift fall to that level would be likely.

If you trade GBP, look out for our Brexit Briefings, filed at 0900 GMT every day Monday-Friday