AUD: The ongoing trade war between the US and China has been a big factor behind the underperformance in the Australian Dollar in 2018 with the currency losing over 10% of its value from the 52-week peak against the greenback. The currency is typically seen as a liquid proxy for Chinese economic sentiment as China makes up 1/3 of Australian trade. As such, the 30% drop in the Shanghai Composite, alongside the Yuan’s push to 7.00 (vs. the USD) and with growth at the weakest level since the financial crisis, this goes hand in hand with the weaker AUD theme. Trade tensions between the US and China have shown no signs of abating amid the record wide trade deficit that the US has with China, consequently, pressure on the Aussie could persist throughout the remainder of the year. 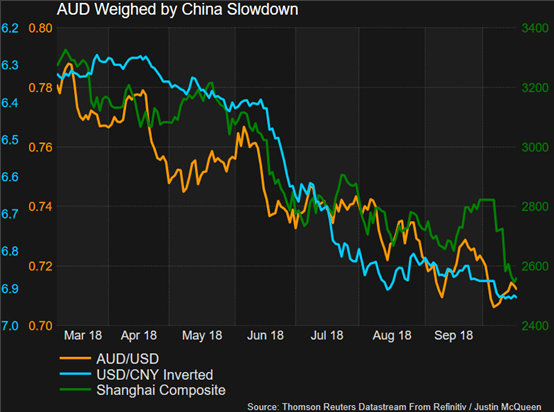 USD: The Federal Reserve continues to tighten monetary policy while the rest of the world remains accommodative. In the latest FOMC meeting minutes, officials signalled that rates move into the restrictive zone (above the 3% neutral rate). Consequently, with the RBA continuing to stick with its neutral zone and with expectations for a hike not beginning to be priced in until the latter half of 2019, rate differentials may continue to favour the USD vs the AUD.

Trade Risk: Speculators remain heavily short the Australian Dollar with bearish bets valued at $5.9bln, which is the second largest shorted currency against the greenback after the Japanese Yen. As such, there is a risk that provided there is a bounce back, short covering could see a more pronounced relief rally. Elsewhere, President Trump and Xi are expected to meet at the G20 summit in November, a positive rhetoric from both parties could see AUD supported with negative sentiment over trade wars potentially easing. Another factor to take into consideration is that Australia’s terms of trade are beginning to rise with the price of its largest exporting commodity, iron ore, increasing to the highest level since Q1 18, eyes will also be on copper prices.