USDJPY and GBPUSD Opposing Dollar Setups, EURGBP Its Own Appeal

The sharp jump in volatility this week certainly defied the economic docket and seasonal expectations of yours truly. And, I would enjoy seeing a persistent swell of activity to generate a broader field of opportunities in these recently troubled markets, but it still seems unlikely until we can pull off a high-correlation and aggressive market tumble. It is with that skepticism in mind that I’m considering opportunities across the market. Starting with USDJPY, this pair can perform under multiple scenarios. I like the short-side below 110 ideally, but it would be a move all the way back up to 111 that would put off the downside potential to clearly indicate any intention of meaningful bear effort has been snuffed. Given the average pace these past months, this would be setup that could take weeks to play out if volatility does indeed die down for the foreseeable future. That said, there is a larger multi-year congestion that is playing out here and caters to the general difficult to develop a range. My skepticism over the Dollar’s run plays well on this view, but if risk aversion were to manage a second wind, it would likely pull this pair down as Yen outpaces Dollar on sentiment downdrafts short of sheer panic. Progressive levels of support from 107.50 (swing low), 107 (50% Fib of 2021 range) and 106 (former range high and 61.8% Fib) should be considered for bearish progress with an understanding that the further out it is, the longer it could take to get there. 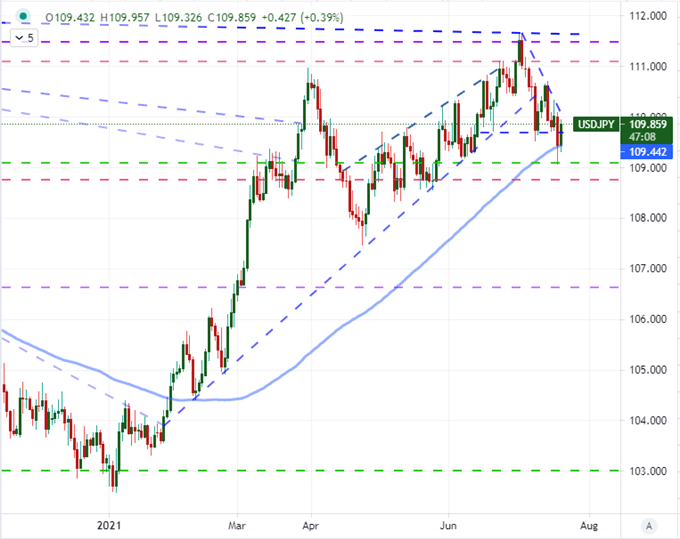 If the Dollar does manage to break convention and find meaningful traction, it is good to have an alternative ready to go. In such an event, I remain dubious that USDJPY would be the best option for further move to the upside given how much deviation it has seen relative to its Dollar peers over the past. For the purposes of a bullish Greenback scenario, I will push aside USDCAD and AUDUSD despite how significant their recent breaks because the monetary policy considerations are a headwind that could readily return if monetary policy is the foundation of traction. Alternatively, GBPUSD’s break below its trendline support at 1.3750 and the subsequent move below the 200-day moving average has extended despite greater hesitation elsewhere. This was a major break, but it was one in the context of a move back into a larger range. I don’t like an active position from current levels since I have a bearish volatility and general Dollar view. However, if we clear 1.3500 as a major resistance through 2020 or bounce and hold below support in the 1.3700/3750 area, I think there could be potential. At that point, I will revisit and consider the levels. 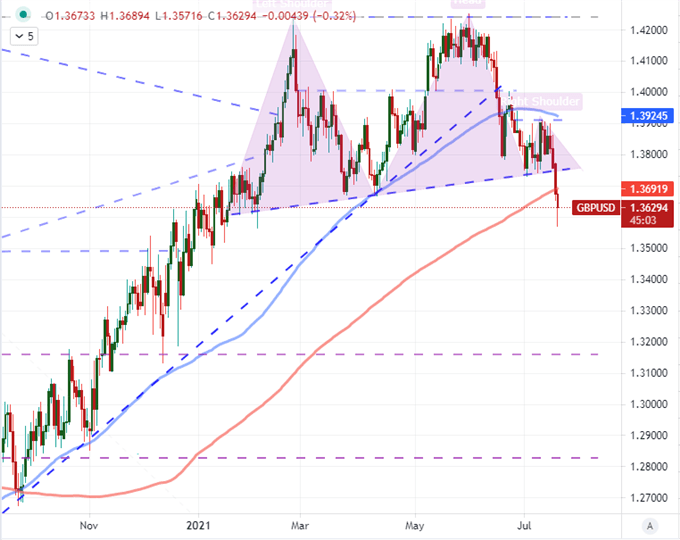 Speaking of the Sterling, a slide for the currency may be its own motivation. EURGBP is the second most liquid of the Pound crosses and it managed a break from a tighten channel and the 100-day moving average above 0.8600 yesterday. This may appeal the short-term trader, but I am looking for the bigger move and the clearance from the most restrictive range in 7 years. The past 100-day historical range is the most constrained since May 2014. If we managed a break above 0.8700, an approximate 100 point backstop and a time frame of over two weeks may allow for movement higher in the order of 200-300 points. 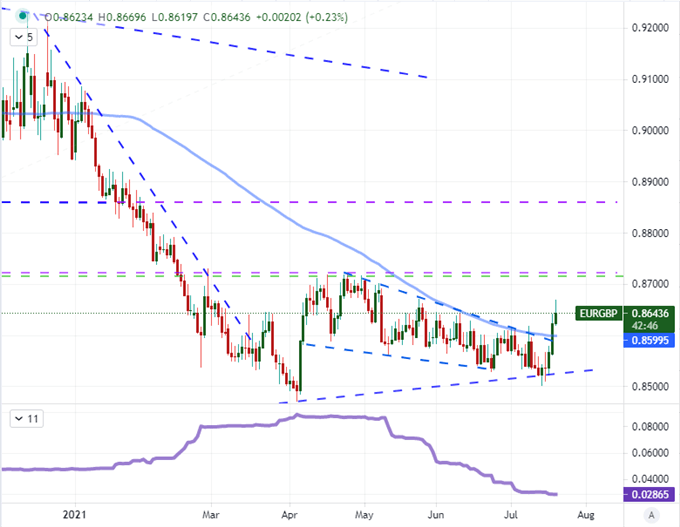 EURUSD Overdue for a Technical Break