EUR/USD appears to be building a bullish series of impulse waves. The current impulse wave may reach 1.15 with even higher levels in focus from our longer-term outlook.

EUR/USD Elliott Wave at high probability for a bullish reversal

We have been closely tracking the Elliott Wave pattern in EURUSD and issued a longer-term bullish forecast for a large rally on October 1. At that time, the forecast pointed at gains towards 1.18 and possibly higher levels. So far, the structure of the advance from the October 1 low is constructive towards the bullish forecast.

The set back that has been in place from the November 3 high is viewed as temporary and retraced 61.8% of the October advance. As a result, we are seeing enough evidence that the November correction may be over or close to terminating. Therefore, bullish advances towards 1.18 may be in play. 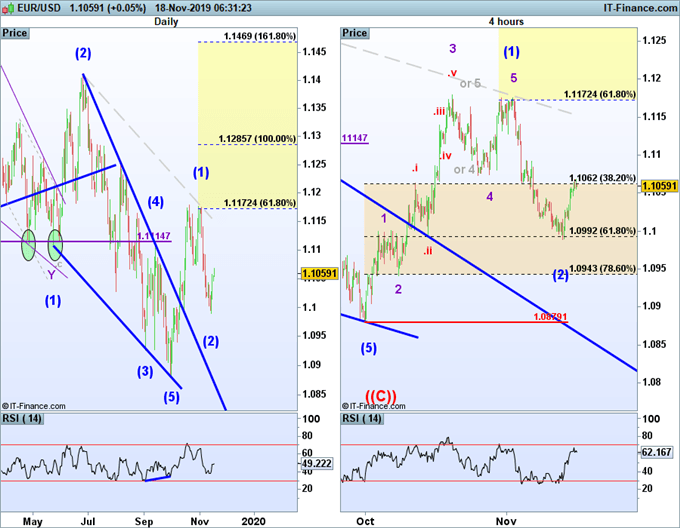 My view of the current Elliott wave for EUR/USD is that wave (2) finished on November 14. This suggests that wave (3), a bullish wave, is underway towards higher levels. According to Elliott Wave Theory, wave (3) must end beyond the termination point of wave (1) while subdividing as an impulse wave. This means wave (3) would push above 1.1176.

As stated in our longer-term forecast of October 1, I am viewing minimum targets of 1.18 with higher levels possible. Wave (3) would be 161.8% of wave (1) near 1.1469 so this price zone becomes an early target as alternating waves like (1) and (3) tend to have Fibonacci related distances of one to another

Either way, the current bullish wave that began October 1 is in its infancy.

Broad Based US Dollar Weakness

We discussed in last week’s Opening Bell webinar the prospects for broad based US Dollar weakness. US Dollar index has turned lower from the cited pivot zone. This suggests DXY and the broader US Dollar is at risk of becoming weaker. Initial targets are below 94.60 with even lower levels into the 80’s possible.

Our analysis points to a bearish corrective wave ending November 14. This implies a bullish impulse wave may be underway to 1.15. Even higher levels are forecasted depending on the structure of the advance.

Discuss this market with Jeremy in his weekly Elliott wave webinar.