EUR/USD has reached our initial target identified in September as the corrective pattern appears to be finished.

Elliott Wave at high probability for a reversal

We have been closely tracking the Elliott Wave pattern in DXY and EURUSD for the past months. After anticipating a turn and closing out shorts on August 20, we are waiting for the bullish corrective pattern to clear prior to wading back into the waters.

As late as September, the pattern began to clear and it appears as though the ‘b’ wave of an a-b-c Elliott wave zigzag pattern has finished. This means, we are anticipating EURUSD to trade higher towards 1.19-1.22 in the coming weeks. 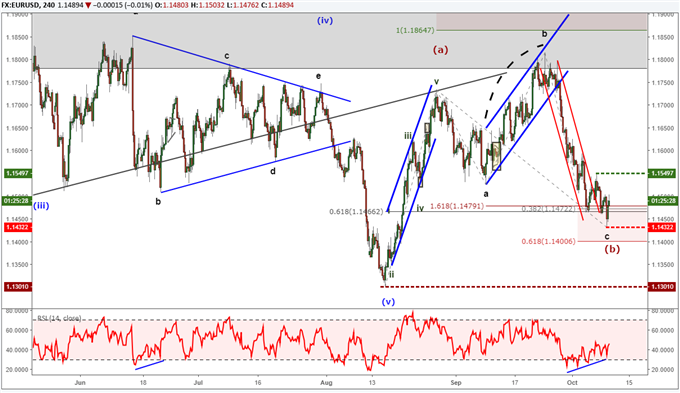 As evidenced through the RSI divergence, it appears EURUSD is trying to form a bottom. A bullish break above 1.1550 would be enough evidence that a bottom is in. A retracement to 1.1470 would afford a tight enough risk scenario to dip our toe in the water for a bullish trade as well.

Based on Elliott wave relationships, the first target is where wave (c) of the zigzag is equal in length to wave (a).

broad based us dollar weakness

We discussed in Monday’s US Opening Bell webinar the prospects for broad based US Dollar weakness. My colleague Tyler Yell highlighted a bullish GBPUSD opportunity that appears to have legs to it. We discuss in Monday’s webinar using 1.3133 as an early indication of a bullish breakout so long as GBPUSD remains above 1.2922.

The run towards USD weakness may carry DXY down to 93.80 and possibly 92.