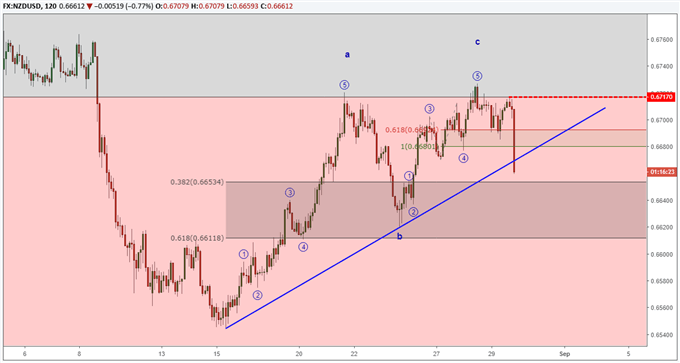 Kiwi has found a difficult time increasing in the wake of the US Dollar weakness that began August 15. Today, NZDUSD has tested and broken a trend line in place since the low in the pair. This indicates the mood of the market may be changing.

Additionally, EURNZD has broken to its highest level since September 2015.

Therefore, it appears an opportunity exists to jump on NZD weakness. The favored trade is for additional strength in EURNZD and additional breakdown in NZDUSD.

Risk to Reward Ratio 1 to 2

(We studied millions of live trades to find what makes some traders successful over others. Risk to reward ratios was a common trait so we used that in our Traits of Successful traders research.)

From an Elliott Wave perspective, a broken support trend line is a negative pattern. This elevates the probability that the increase from August 15 is a three-wave rise labeled as a zigzag.

If NZDUSD was about to explode higher, it would have needed to bounce higher immediately to hold above the trend line. Therefore, a break of the trend line opens the door to further losses to retest the August 15 low.

Additionally, the percentage of traders who are long NZDUSD have increased over the past 5 hours from 61% to 65%. This is an additional bearish signal.

Though we are not specifically performing an Elliott Wave analysis on EURNZD, our viewpoint on EURUSD is that it is rallying in a larger corrective wave that may last for several weeks or months. This may be a medium term trend towards US Dollar weakness that NZD may not participate in. Therefore, pairing EUR against NZD may have medium term potential. 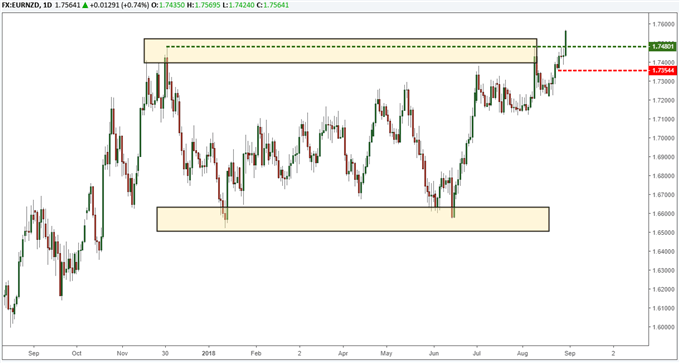