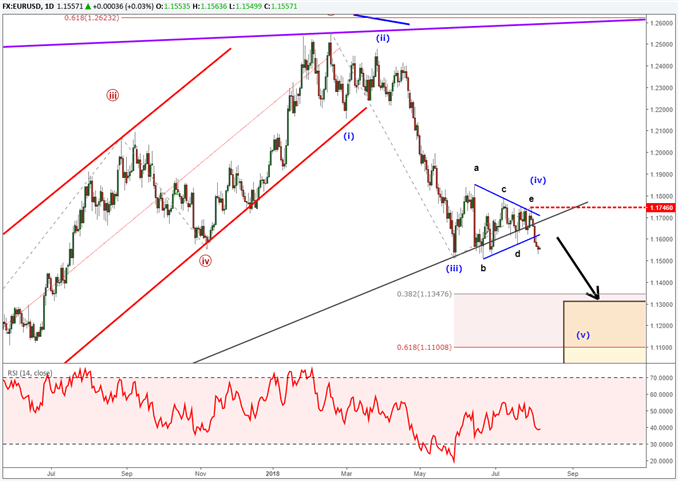 Probabilities Shifting Towards Near Term Bounce in EURUSD

EUR/USD has reached our initial target identified in March as the bearish impulse wave nears a terminal point.

EURUSD Elliott Wave Suggests we are in a terminal wave

We have been holding short EURUSD in two separate positions from April 10 at 1.2350 and April 26 at 1.2153 in anticipation of a developing bearish impulse wave. Our first target of 1.1554 was hit on May 29 yet the bearish impulse wave appeared incomplete. As of May 29, we could count three of the five Elliott Wave impulse waves lower, which implied a fourth wave correction and fifth wave sell off still to come.

The EURUSD chart now shows the fourth wave triangle pattern completed on July 31 suggesting the market has been moving lower in a fifth and final wave for a week now. As we inspect the intraday EURUSD chart, the probabilities are shifting towards a low forming nearby as we can count an impulse wave complete.

Shorter term probabilities for EURUSD increase that a bounce forms

Therefore, we are moving to protect the position by closing half of the trade at the market (near 1.1559 booking +791 pips) while moving the stop loss on the remaining position to just above the July 31 high at 1.1750. Therefore, if EURUSD continues towards our lower targets of 1.1350, 1.1200, and 1.1100 then we can still participate in the movement. If EURUSD moves above 1.1750, the odds are high that the impulse wave is over and we will happily exit the full position at that time. 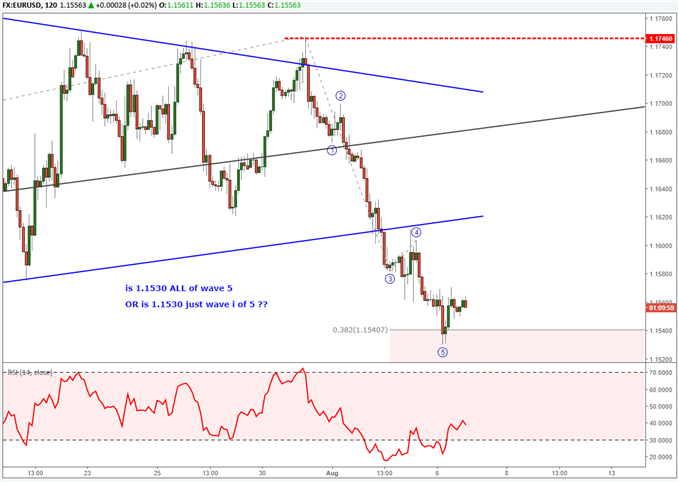 “I hear that a lot of traders struggle with profitability, why?”

The trade scenario mentioned above does adhere to the Traits of Successful traders we researched in the guide.

Where can I learn more about Elliott Wave Theory and how to trade with it?

Elliott Wave Theory is a study of waveforms, patterns, and wave structure. The rules and guidelines are simple and can be found in these beginner and advanced Elliott Wave guides. The challenge with Elliott Wave principle is identifying and interpreting the waveforms in real time. As a result, I would suggest you follow the writing and webinars DailyFX has devoted to Elliott Wave Theory.