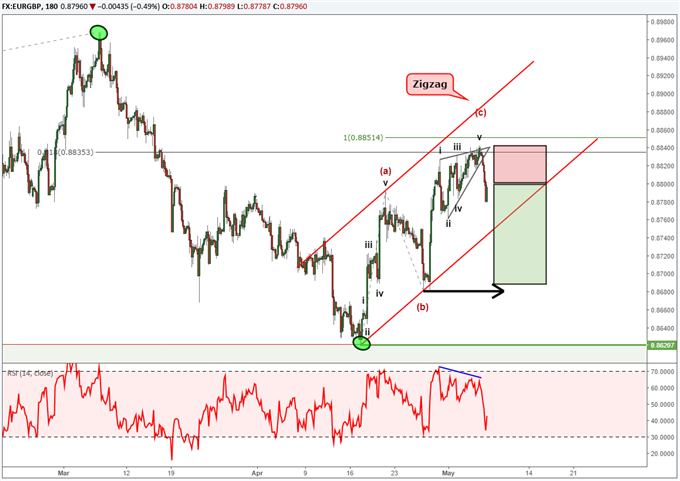 EURGBP chart shows a clear Elliott Wave zigzag pattern including an ending diagonal. This pattern combination offers a clear set up with a positive risk to reward ratio.

When trading, I am looking for specific and identifiable patterns where I get a good shot at a good risk to reward ratio.

The Elliott Wave chart for EURGBP is setting up nicely for a short position. According to Elliott Wave principle, the rally from April 17 to May 4 carves as an Elliott Wave zigzag pattern labeled (a)-(b)-(c).

We know from our Elliott Wave zigzag pattern studies that they subdivide as 5-3-5 patterns. We can identify a clean 5-3-5 (black labels) where wave (c) finished as an ending diagonal pattern. This Elliott Wave diagonal pattern terminated near the 61.8% Fibonacci retracement level of the March 7 to April 17 down trend.

Ending diagonals tend to be swiftly retraced back to the origination of the pattern. The ending diagonal pattern started on April 26. Therefore, we aim our first target at .8690.

Additionally, these Elliott Wave zigzag patterns typically fall within a corrective wave sequence and likely become completely retraced. Therefore, we will use the pattern’s origination at April 17 as a secondary target.

At smaller degree, it appears an impulse wave lower finished near today’s lows. Therefore, we will anticipate a small bump higher to establish a short position using the May 4 high as the risk level.

We remain in the EURUSD short trade that was scaled into back in April.

Our first, second and third targets remain as we follow the current down trend. Our first target sits at 1.1554 and we will see how the price action develops before adjusting the stop loss further.

What is the Elliott Wave Theory?

Elliott Wave Theory is a forex trading stud that identifies the highs and lows of price movements on charts via wave patterns. Traders often analyze the 5-wave impulse sequence and 3-wave corrective sequence to help them trade forex strategically. We cover these wave sequences in our beginners and advanced Elliott Wave trading guides.

How else could you trade Elliott Wave diagonal patterns?

As alluded to above, ending diagonal patterns are one of my favorite patterns to trade. This is because we have a defined area to establish a stop loss and our profit target is generally multiple times the size of our risk.

We created this four step guide to trade the diagonal pattern and it is based on using the pattern’s wave 5 extreme as the risk level while targeting the origination of it.