EUR/USD Celebrates to Highest Level in 3 Years; The Party May Not Last

EUR/USD price has rallied as the German coalition breakthrough relieves some political worries. However, EUR/USD has reached 1.22, which is a level of long-term significance we identified through the Elliott Wave principle back in September 2017. Our Elliott Wave analysis suggests a large trend lower begins from nearby levels.

On Thursday, we highlighted how the Elliott Wave analysis on EUR/USD showed the three year bullish pattern nearing an end. In fact, this pop higher to 1.22 is not a surprise as we identified its potential back in September:

From a shorter term perspective, if the wave labeling is correct, then we anticipate a shallow correction back to the 1.16 handle followed by another retest of the 1.20 high to finish off the fifth and final wave of the sequence. I wouldn’t be surprised to see this fifth wave work higher to 1.22 as a couple wave measurements appear in that vicinity.

EUR/USD did eventually bottom on November 7 at 1.1554 creating the fourth wave of the impulse wave pattern. This fifth wave higher is shaping as an ending diagonal pattern.

We will review the significance and wave relationships appearing near 1.22. 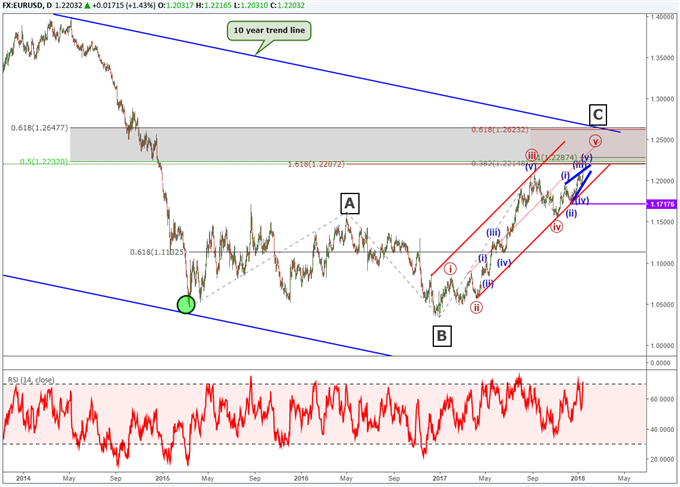 Therefore, we are expecting a reaction lower from nearby levels to take place. If our Elliott Wave analysis were correct, then the ending diagonal pattern would need to terminate below 1.2288. As a result, this sets up a short trade opportunity.

Shortly after trading resumes on Jan 14, if EUR/USD has not gapped up and through 1.2288, then we will establish a short position.

This will be the first time we have flipped our bias on EUR/USD since May 2017 when the pair was trading near 1.1252. On May 22, we flipped to a bullish bias as several key levels were broken and we have remained bullish until today.

If EUR/USD breaks above 1.2288, then we will consider other alternative patterns that include a double zigzag pattern within wave (i) or (iii) of the ending diagonal. Essentially, a break above 1.2288 stretches out the diagonal pattern and delays its termination. However, the resolution of the ending diagonal pattern remains the same in that a bearish turn is looming nearby.

“I hear that a lot of traders struggle with profitability, why?”

Where can I learn more about Elliott Wave ending diagonal patterns and how to trade them?

USD/JPY and as well as EUR/JPY, GBP/JPY, and AUD/JPY were markets discussed in Jeremy’s January 3 webinar forecasting 2018 trends. Watch a recording by registering here.

Will USD/JPY Break its Trading Range?