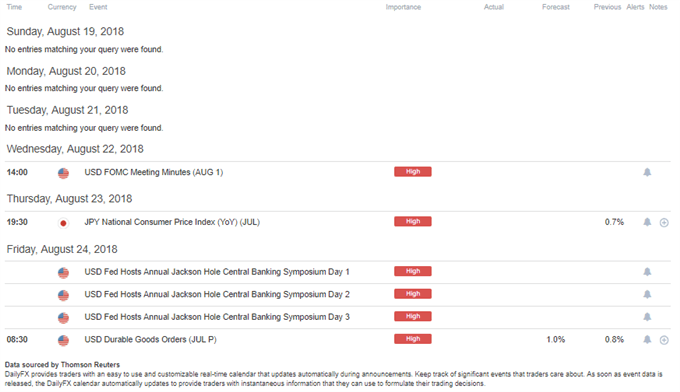 - DailyFX Quarterly Forecasts have been updated for Q3, and are available directly from the following link: DailyFX Trading Guides, Q3 Forecasts.

- If you’d like more color around any of the setups below, we discuss these in our live DailyFX webinars each week, set for Tuesday and Thursday at 1PM Eastern Time. You can sign up for each of those session from the below link:

It was a brisk week across global markets as the US Dollar continued its topside advance early in the week, only to pullback on Thursday and Friday. While risk aversion remained a very real threat, US equities spent most of the week rallying and appear set to continue-higher. This shrugs off a bit of the global contagion fear that started to populate last week, although it would be unlikely for currencies such as the Euro to escape completely unscathed should the situation in Turkey continue to develop.

Next week sees an even quieter economic calendar, particularly in the early portion of the week as no high-impact items are on the docket until Wednesday’s release of FOMC meeting minutes from the July rate decision. The big item of interest is on the docket for the end of next week with the Jackson Hole Economic Symposium. This is where a veritable ‘who’s who’ of global Central Banking will descend upon Jackson Hole, Wyoming to discuss various topics around Central Banking.

DailyFX Economic Calendar: A Quiet Outlay Early, Picking Up in the Second Half

While its very likely that these folks will do everything in their power to avoid creating controversy, some element of volatility appears inevitable as there are a series of burgeoning themes sitting at the forefront of global markets at the moment. Below, we look at four FX setups for next week, and it’s important to note that these are designed for after next week’s open, as a gap through support or resistance can vastly alter the nature of the setup.

Last week we had looked at short-side setups in EUR/USD, largely driven by the anticipation for trends in the Euro and US Dollar to continue. And while that did take place, bears remained so active that prices didn’t quite pullback far enough to allow for bearish entry.

But over the past couple of days and since tagging the 1.1300 psychological level, Euro bears and USD bulls have been taking a break. Prices in EUR/USD are pulling back closer to these reference points, and the prospect of bearish continuation remains, allowing for use the of same zones from last week that have yet to come into play for lower-high resistance. The first of these zones begins at the 50% marker of the 2017 bullish trend at 1.1448, and runs up to 1.1475. A bit higher we have the May and June swing low of 1.1509 running up to the 1.1528 swing. And the last area to look for resistance before the bearish trend is negated takes place at the confluent area of prior resistance we looked at earlier in the month, straddling the 1.1600 level.

The key here is waiting for resistance to show as indicated by top-side wicks on candlesticks on the four-hour price chart, using the wicks as evidence of seller reaction to the respective zone of resistance.

AUD/USD Runs into Big Support, but Can Bulls Take Control?

A big area of long-term confluent support came into play this week for AUD/USD. The area around .7200 has a couple of big picture Fibonacci levels, with the 61.8% retracement of the 2001-2011 major move at .7185, while the 76.4% retracement of the 2008-2011 move resides at .7205. Perhaps more importantly, this zone of support has a track record for reversing bearish trends, as this happened twice in 2016. This level came into play briefly on Tuesday/Wednesday of this week, and buyers responding by pushing prices off of the lows.

At this stage, it’s difficult to hypothesize how this support interaction could end up being as robust as the one we saw in late-2016/early-2017, as that run lasted for more than 900 pips. As such, we’re going to keep expectations here to a moderate level, looking for prices to rise back into the bearish trend-line that’s held resistance in the pair for the bulk of 2018 price action. This projects to the approximate area around .7400 for next week; and should resistance begin to show off of another test of this trend-line, bullish exposure should be eliminated and bearish setups could be sought-out, looking for a continuation of lower-lows and lower-highs.

This week saw EUR/JPY finally dig into some support after last week’s aggressive bottom-side breakout. Last week saw prices catch support at a Fibonacci level around 128.52, and when prices broke-thru, the bottom really fell out of the market. Bears remained in control all the way down to the 125.00 level, at which point support began to set-in. This is the same area that had provided a bounce in late-May, and at this point, sellers have continued to push despite the fact that a big long-term level of support has just come into play.

At this stage, bearish positions could be attractive, but only if a more defined area of potential resistance can be used to manage risk. I’ve plotted two such zones in EUR/JPY off of prior price action: The first running from 127.24 up to 127.50; and the second drives right back to that price we had previously used for short-side breakouts at 128.52. Resistance in either of these areas keeps the door open for bearish setups in the pair.

There is very little by way of positivity around the British Pound at the moment. As a matter of fact, the most positive thing around the currency right now might be just how negative matters have been; bringing to light the potential for prices having overshot as a series of bearish variables re-entered the equation. As we get closer to the EU-UK showdown for Brexit negotiations, very little is clear as to what we might be able to actually expect. The one thing that we do know is that the Bank of England remains pessimistic, as they have through much of the post-Brexit period.

This theme caught another shot-in-the-arm earlier in August when the bank hiked rates for only the second time in the past decade, yet were so incredibly dovish while doing so that the currency has spent much of the past two weeks in some form of collapse.

We hit another low-point this week when prices ran into the 23.6% retracement of the ‘Brexit move’ in the pair; and it was only four months ago that we were tagging resistance at the 78.6% marker. But – quite a bit has changed since then, and GBP/USD has went into a hard oversold move as can be seen via RSI on both the Daily and Weekly charts of the pair.

Going along with this week’s support test in the pair was a decrease in net long exposure via IG Client Sentiment. While this indicator is contrarian, with net-long readings opening up short ideas, changes in the indicator can be helpful as well. When retail positioning quickly changes in response to a technical level, that can often show retracement potential, much as we looked at last month with a counter-trend setup in GBP/USD.

Do you want to see how retail traders are currently trading the British Pound? Check out our IG Client Sentiment Indicator.

At this stage, expectations behind a bullish advance in the pair should be kept at a minimum. I’m looking for prices to move back into the prior zone of resistance that we had looked at for short-side continuation earlier this week. That zone starts at 1.2817 and runs up to 1.2846. There’s a second zone of interest that runs from 1.2918 up to 1.2956, and if prices are able to break-above that, the bearish longer-term theme will soon begin to come into question.