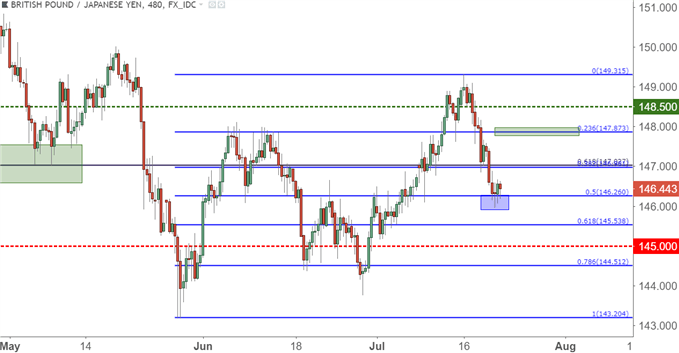 - DailyFX Quarterly Forecasts have been updated for Q3, and are available directly from the following link: DailyFX Trading Guides, Q3 Forecasts.

- If you’d like more color around any of the setups below, we discuss these in our live DailyFX webinars each week, set for Tuesday and Thursday at 1PM Eastern Time. You can sign up for each of those session from the below link:

US Dollar Pops Then Drops on Trump Comments

It’s been an interesting week across FX markets, as the US Dollar initially continued the bullish trend that defined the currency’s Q2 price action; and then promptly began to reverse on Thursday afternoon following a series of comments from President Trump regarding FOMC rate policy. The big question as we move into next week is whether the late-week pullback might turn into something more, and on the calendar to assist with the matter is a European Central Bank rate decision set for Thursday. This ECB rate decision should be a bit less dramatic than last month’s announcement of stimulus taper. But the topic of rates will very much be in the spotlight, as that prior rate decision saw the bank set the bar for rate hikes far out into the future, anticipating no such moves until ‘at least through the summer of 2019.’

Below, we look at a series of setups for next week’s price action. It’s important to note that each of these are designed with next week in mind as a gap-through support or resistance can vastly alter the nature of the setup, thereby nullifying the theme or scenario before the trade ever has a chance to get started. And with so much market volatility coming from headlines, including those of a political nature with the ongoing saga around Brexit, traders would likely want to be even more cautious than usual of weekend gap-risk.

Perhaps surprisingly, Q3 was fairly bullish for the British Pound against the Japanese Yen as we came into this week. This happened even amidst a backdrop of negative headlines, dramatic politics and a brutal amount of uncertainty in the not-too-distant future for the UK economy. As we move closer to the EU-UK showdown set for October, there is still very little clarity towards what type of deal might actually be struck, and markets generally abhor the idea of uncertainty. But despite all of that noise around the British Pound, weakness in the Japanese Yen was able to take over, and this helped to keep GBP/JPY on a steady up-trend through the first two weeks of 2H, 2018.

That theme took a step back this week, and we looked into this in our earlier article on the matter entitled, GBP/JPY: Q3 Bullish Breakout Takes a Step Back. If prices hold above 146.00 through Monday’s US Open, bullish positions become favored with stops set below either 145.50 or 145.00, depending on how far away from 146.00 we are at the time. This opens the door for initial targets at 147.87, at which point stops can be adjusted to break-even; followed by 148.50, 149.32 and then the 150.00 psychological level.

One of the cleaner trends that showed in the first couple weeks of the quarter was the bullish theme taking over in USD/JPY. The Yen spent most of Q1 showing varying forms of strength, very much driven by higher rates of inflation creating fear that the BoJ might find themselves in an ECB-like scenario at some point this year. But as Japanese inflation fell back, so did the fear, and Q2 saw Yen weakness become a workable theme again across FX markets, particularly against the US Dollar that put in a significant bullish run throughout the period.

The open of Q3 saw that bullish theme in USD/JPY hit fever pitch, and just a couple of weeks ago we looked at the prospect of a bullish breakout in the pair to fresh six-month highs. After that breakout took place, prices continued to run, and that lasted all the way into yesterday afternoon at which point a reversal began around President Trump’s comments.

We looked into this setup earlier this morning, positing that support potential from 111.30-111.50 could keep the door open for bullish advances. That zone hasn’t yet come into play, but as long as it remains respected through Monday trade, the door remains open for topside strategies in the pair. Stops can be investigated below the July swing low of 110.26 in the pair, with initial targets set towards 112.20 followed by 112.75 and then the 2018 high of 113.38. 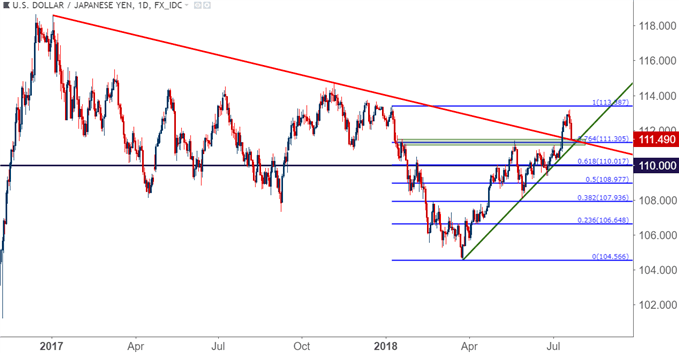 Bearish AUD/JPY on Downside Break Below 82.00

The primary risk of the above two setups is in the prospect of continued strength in the Japanese Yen. If we do see a case of risk aversion creep into markets or even if we just see that earlier Q3 theme of Yen-weakness take a further back seat, each of the above setups could face challenge from that one single fact.

So to try to offset that concern, I want to look at a potential bearish breakout setup in a pair that could be very risk sensitive, and for that I’m looking at AUD/JPY. If AUD/JPY breaks below the 82.00 level, the door is opened for a re-test of 81.00, at which point stops can be adjusted to break-even. The remainder of the lot could then be held in anticipation of a break to fresh 2018 lows, and a target at 80.00 could be set thereafter. 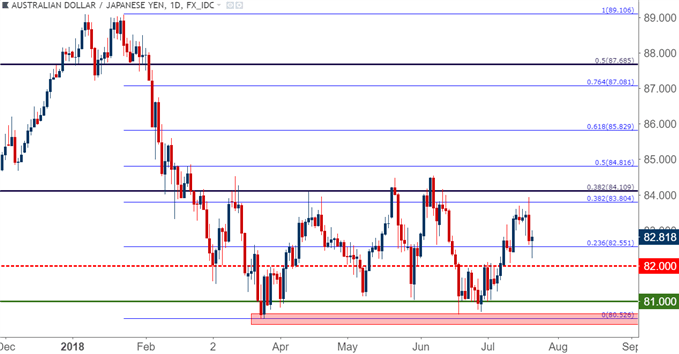