- DailyFX Quarterly Forecasts have been updated for Q2, and are available directly from the following link: DailyFX Trading Guides, Q2 Forecasts.

Our theme in last week’s FX setups was to look for US Dollar strength against both the Japanese Yen and the New Zealand Dollar; and in the week since, we’ve seen that bullish run in the Greenback extend up to fresh three-month highs. Already many are calling game over on the prior down-trend, and perhaps that is the case. But it would still be far too early to say that for certain, as we’ve seen a mere two weeks of strength after more than a year in what was a rather aggressive bearish trend. We discussed this premise earlier this morning while pointing out that the US Dollar is working in a possible bear-flag formation. This can keep interest around short-side continuation in USD, but we’ll likely need a catalyst or two to bring sellers back into the market.

Nonetheless, in the setups below we’re taking a back seat on the US Dollar and looking to take on risk elsewhere after what’s been a fairly volatile week in FX-land. The Greenback has put in a rather significant surge of 3% over the past ten trading days, and considering that this is a non-levered currency, that’s a rather large move in a very short period of time. We also have a plethora of drivers on the calendar for next week, starting with PCE on Monday and continuing with FOMC on Wednesday and NFP on Friday.

It’s important to note: The below entry setups (not including NZD/USD) are designed for next week, so waiting for the open to ensure that prices remain respected above prevailing support or resistance is a necessity; as a gap through any of those levels can vastly alter the state of the setup and, thereby nullify its attractiveness.

This has been our preferred vehicle for USD-strength and we’ve been in a trade over the past nine days that’s worked out well. And there may be more continuation power yet to unfold, but given the risk-reward dynamics remaining on the setup as we move towards next week, an early close to take gains of off the table seems prudent. Closing a position early is something that I’ll rarely do; but with a mere ~50 pips to the next target while I have more than 200 pips to my break-even stop, it becomes an imprudent scenario as we approach a week where the US Dollar will very much be in the spotlight. Instead, that short-side NZD exposure can be re-directed into EUR/NZD, looking to take advantage of the bearish reaction that was seen in the single currency this week, which we look at after the below chart. 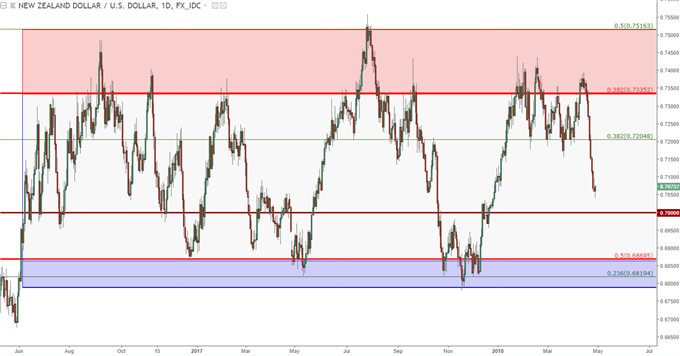 The Euro put in a fairly pronounced move of weakness this week around the European Central Bank. The ECB went dovish, and this really shouldn’t be much of a surprise as its pretty much par for the course they’ve struck over the past few years. Inflation in Europe is softening, and this is likely a response to Euro strength that’s been a fairly constant theme since April of last year, right after the resolution of the first round of French elections.

In an ironic twist of fate, this is the same currency strength that the ECB feared in the scenario of a stimulus taper in 2017. The prevailing thought being that an announcement of taper would lead to a hastening of the bullish move that had already shown, creating a swell of strength in the single currency that would eventually dent inflation to the degree where the European economy might be right back on the ropes towards recession.

The big question around the Euro is whether this week’s pullback is a retracement in a year-long bullish trend or whether we’re looking at a full scale reversal here. Both are possible, although it’s important to note the time discrepancy where Euro weakness is but a few days old while Euro strength has been going for well over a year now. The pullback play appears most attractive here given context.

Choosing a vehicle to mesh up with a bullish scenario on the Euro could be a challenge, particularly given the heat that will be surrounding the US Dollar for next week. One potentially attractive alternative is EUR/NZD, as the Kiwi weakness that has been showing over the past ten days can be used for reversal setups in the single currency.

EUR/NZD had went up for nine consecutive days leading into yesterday’s ECB rate decision. This helped the pair to pullback, and we’re now seeing support show-up at a confluent area of support. This is around the 38.2% Fibonacci retracement of the 2015 major move in the pair, and this area had previously helped to offer resistance on multiple occasions in March.

Support holding at or around this level after trading opens next week opens the possibility of bullish continuation in the pair, with stops set below the 1.7000 psychological level, and a one-to-one risk-reward up to .7250. Stops can be adjusted at the first target, with a secondary target set towards the 2017 high of 1.7421. Optionally, a third scale can be used to play for a bullish breakout to continue up to fresh multi-year highs. 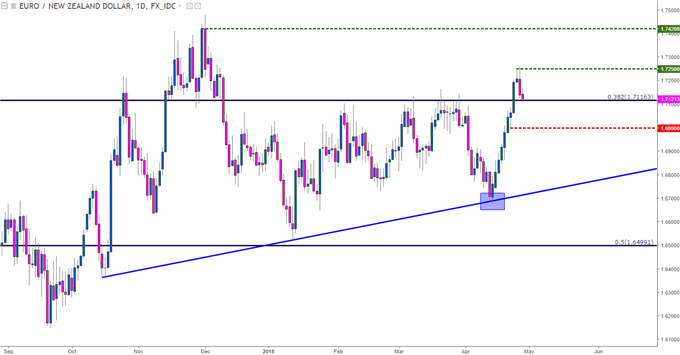 The British Pound was burning down against almost any currency on planet Earth this week. There were few markets that did not show that Sterling weakness, GBP/AUD included. The difference here is the context around the setup, as this bearish move in GBP/AUD merely pushed prices down to the support side of a range that’s been alive for more than a month now. The support side of that range has been coming in off of the 61.8% retracement of the Brexit-move in the pair, and this can be the basis for a topside play.

GBP/AUD Daily Chart: Range with Support From 61.8% Fibonacci Retracement of the Brexit Move 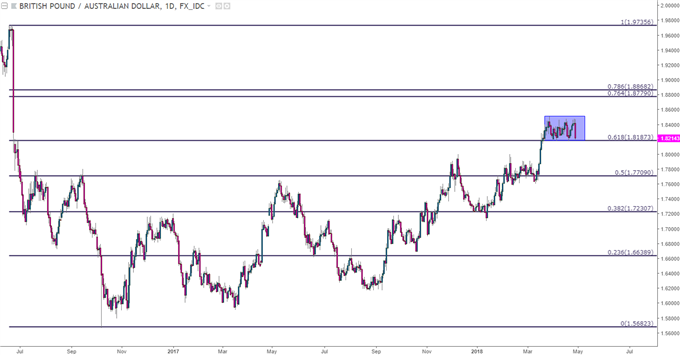 For this setup, prices after next week’s open would need to stay above the April swing-low of 1.8171. If that low is violated, there is a legitimate chance that the range may not hold, and that would nullify the bullish setup here. But should support hold – the door is open for long positions, targeting an eventual return towards the resistance side of the range.

Stops can be set below the swing-low at 1.8138, allowing for initial targets up to 1.8300. Stops can be adjusted to break-even at that point, opening up a secondary target around 1.8370, and another at range resistance around 1.8450. 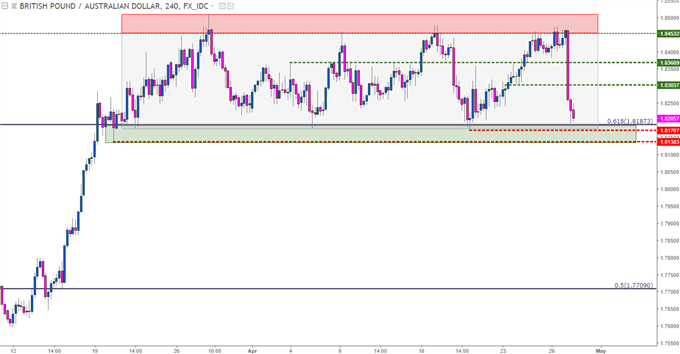