EUR/JPY: Doji at Support, Prior Resistance After Bullish Trend Retracement

EUR/JPY has been on fire for most of the past five months. After the first round of French elections resolved with a rather market-friendly outcome, Euro bulls took over and began driving the single currency to fresh highs under the presumption that the European Central Bank would start to limit their massive stimulus outlays. That still hasn’t happened yet, but this hasn’t stopped bulls from bidding the currency-higher through much of the year.

That move of Euro strength has been quite pronounced against the U.S. Dollar. But this has also shown vividly against the Japanese Yen; and with the BoJ continuing to show a dovish posture with little inkling to move away from their uber-dovish stance, this can keep the Yen weak as a favored funding currency for FX trades.

We discussed the technical setup in EUR/JPY earlier this morning in the article, Support Meets Prior Resistance; and we had discussed the context behind that setup in our market talk article entitled, EUR/USD Begins Test of Key Support as U.S. Dollar Strength Continues. EUR/JPY ran-up to a key Fibonacci retracement at 134.41 on Thursday and Friday of last week, but after grinding around that level for hours, bears took over as the pair began to retrace. That retracement lasted through the early part of this week, until bulls came into bid prices higher at a key zone of support. The level of 132.05 is the 50% Fibonacci retracement of the 2002-2008 major move in the pair, and 131.71 is the prior swing-high. This creates a ‘zone’ of potential support that, thus far, has held up after that retracement. This can open the door for topside plays with stops cast below yesterday’s Doji. For those looking for a more conservative outlay with a wider stop, smaller position size – stops can be set below the previous swing-low at 130.62. 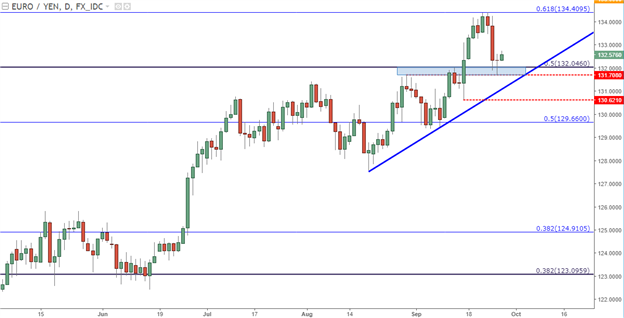 For those that want to approach the setup more conservatively – we may have a morning star formation brewing. If today’s Daily candle closes above 133.07, then the technical formation will be there and this can be an attractive bullish reversal pattern into what has been a very bullish trend.

Initial targets will be placed inside of the near-term high at 133.75, at which point stops can be adjusted up to break-even. If this level gets taken out, the next target is that prior point of resistance at 134.41; and if fresh highs print, additional targets can be cast towards 135.00, 136.50, 138.75 and then the major psychological level of 140.00; all depending on how aggressively the trader wants to push the bullish continuation move in EUR/JPY. 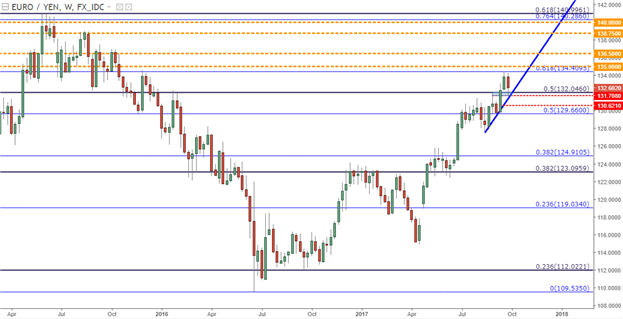