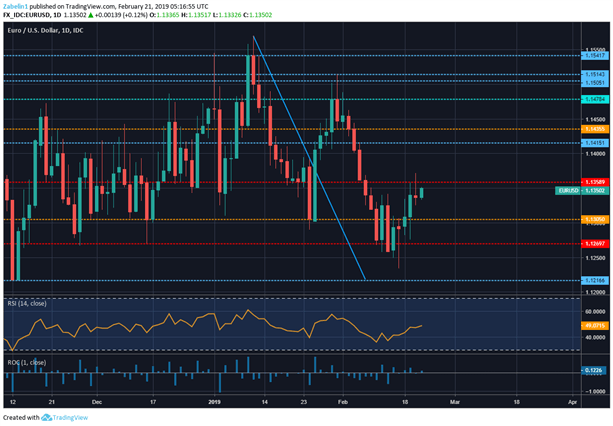 EUR/USD may be vulnerable to several economic reports this week out of Germany, France and Italy, the three largest Eurozone economies. Italy already is struggling with a technical recession, Macron’s government is wrestling with disruptive protests and German growth remained stagnant in the most recent GDP release.

There is also the growing concern of political fragmentation as the continent inches closer to the region-wide European Parliamentary election. Anti-establishment parties for the past few months have been gaining ground in key states that have a larger representation in the EU legislature for the past few months. Having a greater number of Eurosceptic parties there will almost certainly weigh on the Euro, a currency reliant on political unity.

In the more immediate future, German CPI and manufacturing PMI will be released tomorrow along with French and Italian inflation data. These will be key events to monitor. As risk compounds in Europe, the probability that a key piece of data will be the straw that breaks the Euro’s bullish back increases along with the likelihood of a EUR/USD selloff.

German growth in particular has been a key source of concern, especially in Sweden. Slower growth in the so-called ‘steam engine’ of Europe has the potential to create a negative feedback loop. If economic activity in Germany slows, EU member states that rely on its strength will suffer, which in turn might hurt German exports, and so on and so forth.

Since the start of 2019, the Euro has fallen almost two percent against the US Dollar and has shaved off nearly 10 percent since February 2018. Despite being broadly higher for almost a week, EUR/USD may struggle to reach past 1.1415 as the fundamental outlook muddies the outlook for growth. A closer analysis of the price action reveals that technical indicators are also pointing to a resumption of the downtrend. 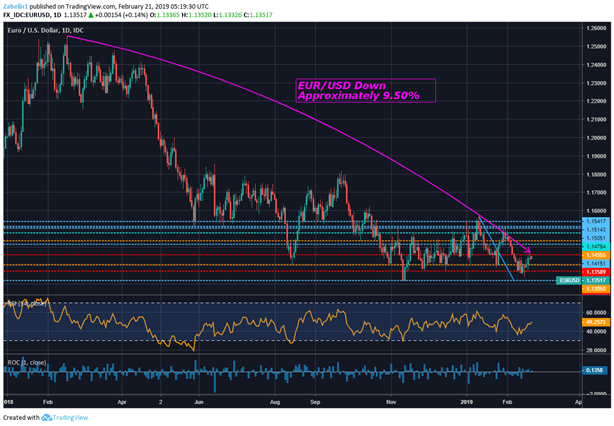