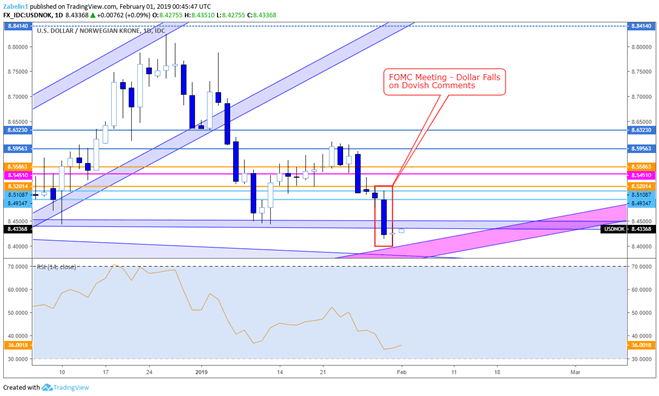 USD/NOK broke through a significant support range on January 30 and is now trading below 8.4382 and is approaching the March support. The pair’s movement recently appears to be less dictated by economic data coming out of Norway – though it does play a factor – but more by the Fed’s policy.

At the most recent FOMC meeting, the central bank did not raise rates and gave off what the markets perceived as a dovish tone to policy. This might explain why the pair dropped almost one percent after the Fed said the case for raising rates has somewhat weakened.

Since early January, economic news out of Norway has been overperforming relative to economists’ forecasts according to the Citi Economic Surprise Index. News-flow has been choppy over the past year however, with the Citi index frequently dipping into negative territory to indicate underperformance.

These inconclusive cues may persist for now, but economic data may begin to undershoot forecasts more frequently and with greater magnitude later into 2019.

Those looking to go long at 8.6323 might have the upper hand because at that point the pair would have already breached several price barriers. Near-term, the pair will have to overcome the January-25 resistance and almost immediately after face the 8.4382-8.4518 range. Fundamental forecasts suggest this could happen with relative ease, but in the near-term the pair may struggle to reach the price target. 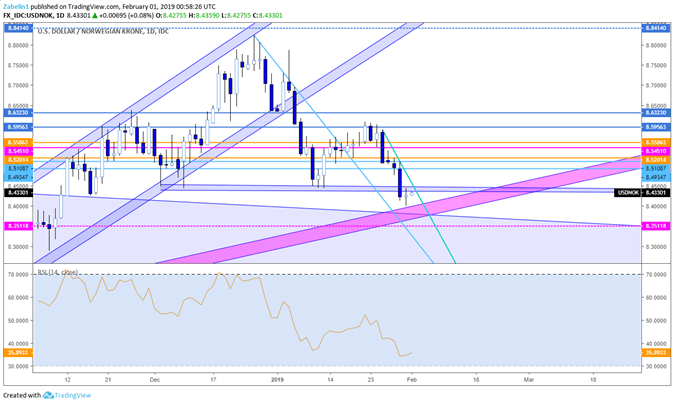