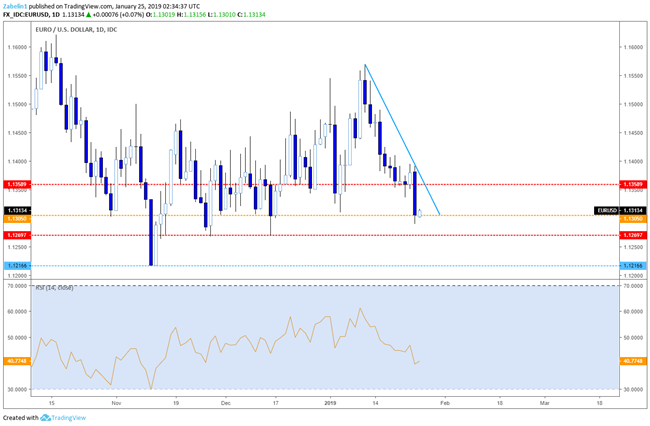 The Euro may fall next week after a cascade of key economic indicators are released which may confirm the ECB and IMF’s forecasts of slower European growth. The Euro traded lower on January 24, opening at 1.1380 and having a daily close at 1.1307, a mere two pips above the 1.1305 support. This was in part fueled by ECB President Mario Draghi’s announcement that the overall outlook has moved to the downside.

Some of the economic reports include Eurozone CPI, France’s Consumer Confidence and Italy’s GDP. CPI forecasts had already been cut from 1.7 to 1.6 percent by the ECB, and the Yellow Vest Protests in France have sent French bond yields soaring and negatively impacted economic data. Italian GDP will be closely monitored given the precarious state of the country’s economy.

Not only may the Euro suffer if the quarter-on-quarter GDP falls short of expectations, but there is a very strong possibility that it may contract for a second consecutive quarter, thereby satisfying the definition of a technical recession. This may then re-ignite the budget dispute Italy had with Brussels that shook financial markets for weeks. Only this time, the circumstances would be direr, especially with the current state of Brexit.

Sellers may hold the upper hand below the 1.1269 level. The next possible support is at 1.1216, where the pair bounced after a brief probing in mid-November. If the data underwhelms, EUR/USD’s downward movement may be accelerated and could potentially gather sufficient momentum to breach 1.1216.