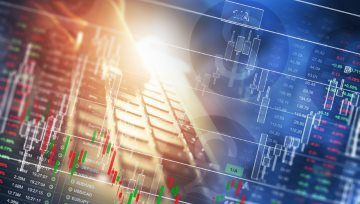 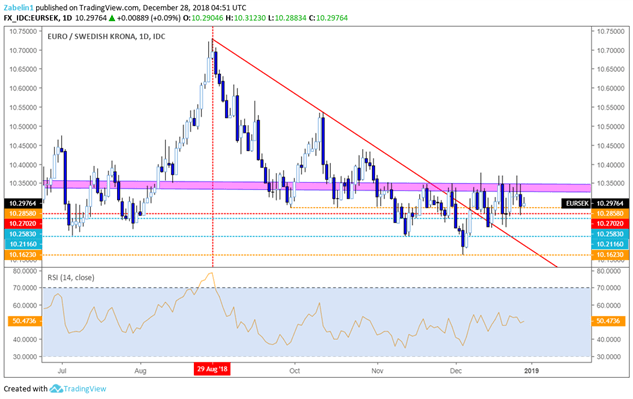 Given the many support levels that lie within close proximity to each other, an opportunity to go short might present itself at 10.2583, with the next possible support at 10.2116. The distance between these two points is greater than the distance between the initial short position and the next possible resistance at 10.2702. What this is means is prices positioning relative to near-term resistance versus support appears to offer a compelling risk/reward short position. 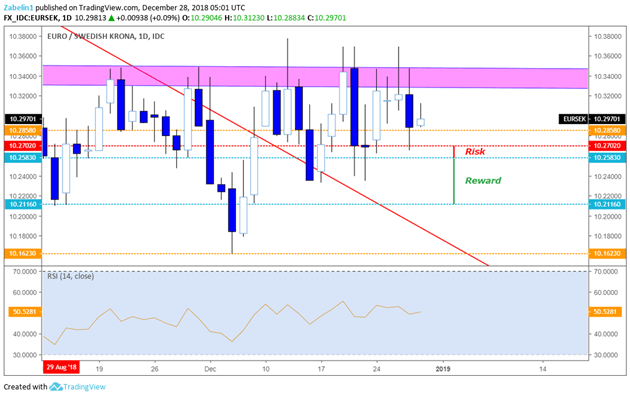 The Riksbank’s policy statement indicated that the next possible rate hike will be in the latter half of 2019 – similar to the ECB – and will plan to implement two rate hikes every subsequent year. The central bank stated that “...the need for a highly expansionary monetary policy has decreased slightly”, and have chosen to take a gradualist approach amid rising uncertainty in international affairs e.g. trade wars and political fragmentation.

Riksbank officials stated that economic activity remains strong and is a conducive environment for maintaining inflation close to the central bank's target. However, they noted that they will be keep a close eye on international developments and Sweden's messy domestic politics that may affect the Krona.

Sweden’s caretaker government also recently passed a center-right budget that will likely entail a fiscal expansion which may provide a boost to inflation and economic activity. This may give impetus for the Riksbank to continue along its policy path and possibly decrease the likelihood of a more dovish revision.

The EU, on the other hand, is projected to experience a slowdown in economic activity while facing political turmoil from Brexit, Italy teetering on a recession and the upcoming EU parliamentary elections. The ECB, in this environment, is not likely to raise rates and investors are already feeling bearish on the Euro’s outlook for 2019.

Therefore, going short EUR/SEK might be an attractive proposition, given the widening divergence in projected economic performance and stability. However, to be fair, Sweden is facing a parliamentary crisis at the moment which may be a foreshadowing of a broader European problem in May. 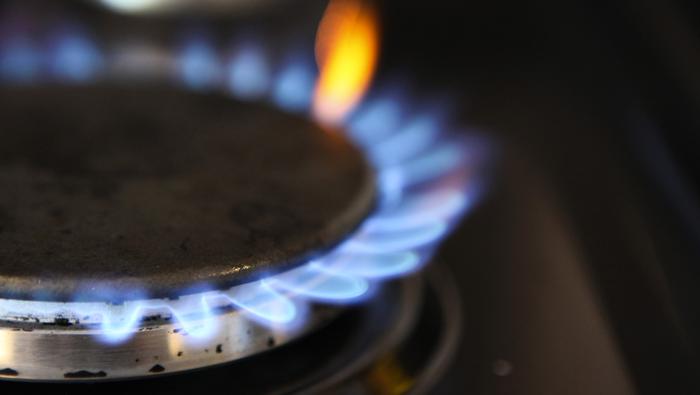