EURUSD attempts to retrace the decline from the monthly high (1.1176) as US President Donald Trump meets with Federal Reserve Chairman Jerome Powell, but the exchange rate may consolidate over the coming days as it fails to extend the recent series of higher highs and lows.

After the meeting, President Trump tweeted that the “Fed Rate is set too high relative to the interest rates of other competitor countries,” and the administration may continue to call on the Federal Open Market Committee (FOMC) to reverse the four rate hikes from 2018 amid signs of a slowing economy.

However, the statement released by the Federal Reserve suggests the central bank will act independently and follow the mandate set by Congress as “Chair Powell's comments were consistent with his remarks at his congressional hearings.”

In fact, recent remarks from Fed officials indicate the FOMC will revert to a wait-and-see approach at its last meeting for 2019 as Chairman Powell and Co. “see the current stance of monetary policy as likely to remain appropriate as long as incoming information about the economy remains broadly consistent with our outlook of moderate economic growth.” 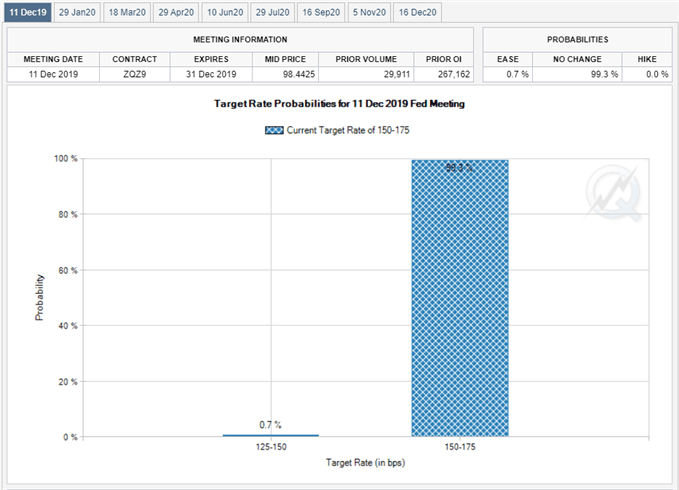 In turn, the FOMC Minutes may also tame bets for another rate cut in 2019, and the shift in the forward guidance may heighten the appeal of the US Dollar especially as Fed Fund futures show a greater than 90% probability the central bank will keep the benchmark interest rate in its current threshold on December 11.

With that said, EUR/USD may face a more bearish fate over the remainder of the week as the FOMC moves away from its rate easing cycle while the European Central Bank (ECB) reestablishes its asset-purchase program.

At the same time, the monthly opening range fosters a bearish outlook for EUR/USD amid the lack of momentum to test the October-high (1.1180).

The failed attempt to test the Fibonacci overlap around 1.0950 (100% expansion) to 1.0980 (78.6% retracement) has spurred a short-term rebound in EUR/USD, but the lack of momentum to extend the recent series of higher highs and lows may bring the downside targets on the radar.

Will keep a close eye on the Relative Strength Index (RSI) as it snaps the upward trend from September and appears to be carving a bearish formation.

For more in-depth analysis, check out the 4Q 2019 Forecast for the Euro